BW Gets Bold and Gold 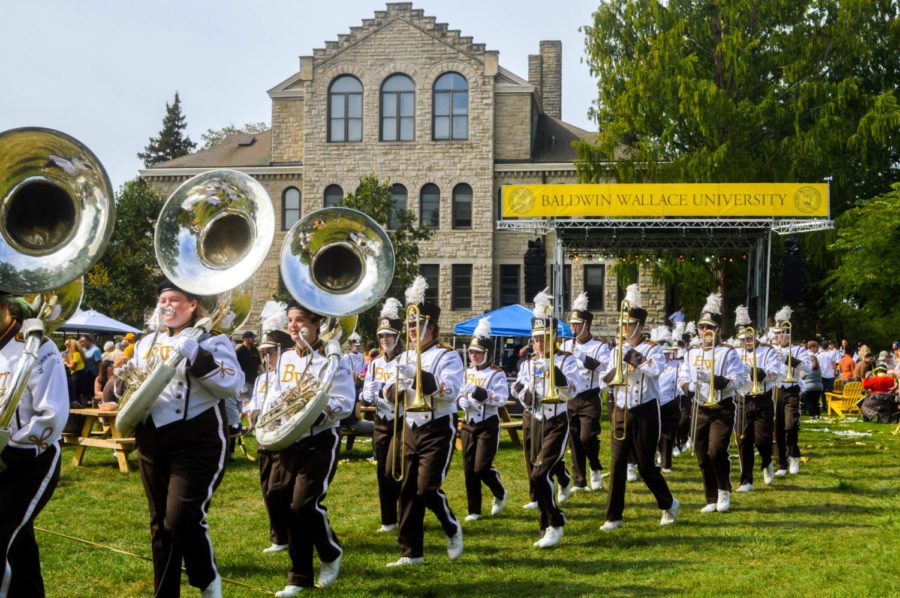 Baldwin Wallace held its annual homecoming celebration after a year off, due to COVID-19 restrictions.

According to Lisa Judge, associate director of alumni engagement at Baldwin Wallace, the 2021 homecoming event was one of the most highly attended alumni events in Baldwin Wallace’s history.

“The estimated turnout for the event, including alumni, parents, students, and community members was around 3,000 people,” Judge said. “It was really big. We called it bold and gold, and it was very bold, so we lived up to the name”

“Our theme this year was ‘All Together Since 1845,’ being the year of Baldwin Wallace’s founding,” said Ilia Estremera, coordinator of alumni events and communications. “This was a chance to all to get back together to campus to reconnect and enjoy each other’s company again.”

There were also new additions to the celebration this year. One of these modifications was the selection process for homecoming royalty.

In previous years, Baldwin Wallace students chose a homecoming king and queen in a school-wide vote. The ballot consisted of students that organizations nominated.

“It was just who knows the most people, which I did not love,” said Alex Minyard, sophomore class president.

Minyard and the other class officers decided to change the homecoming royalty voting process. Student organizations nominated their members, and the student government sent out a school-wide ballot with these names. The top 11 most voted for nominees took part in an interview process with Baldwin Wallace’s faculty members.

“It made how we chose… about how (the nominees) represent BW; we could see how they really care about Baldwin Wallace,” Minyard said. “We want them not just to be popular, but also have a positive impact on the university.”

Minyard also decided to do away with the titles of “king” and “queen.” Baldwin Wallace used to select one male and one female as royalty. Minyard said she wanted to change this and choose two people that best represented Baldwin Wallace, regardless of their gender identity.

Another change to the celebration was the alumni association reintroducing the tradition of grand marshals to lead the parade and speak at the festival.

“We had not had grand Marshalls for quite some time.” Judge said. “It is a way to celebrate our history and heritage by selecting people that are true yellow jackets for life.”

Chosen for this position were alumni Irene and Ted Theodore.