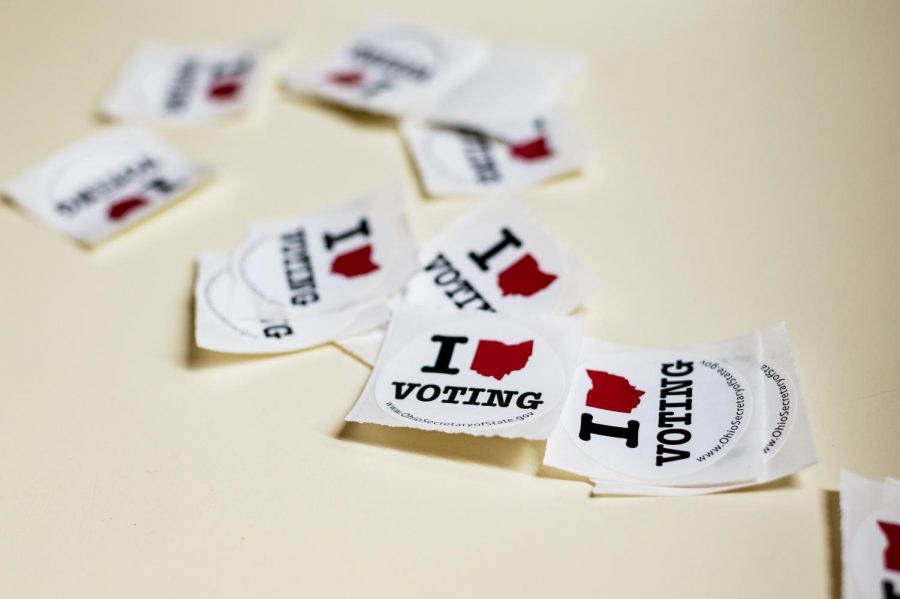 The total voter turnout in Cuyahoga County for the Nov. 5 election was 25.88%. Jackets Engaged made efforts to increase voter engagement across BW’s campus in the weeks leading up to the election.

For BW voters from out of state, the registration process for Berea’s local elections involves the presentation of a couple different documents. To register to vote in the local elections, students need to provide a proof of residency and their home state ID.

Jackets Engaged focused on promoting absentee voting, due to the fact that a majority of students don’t go through the registration process, said Monaghan.

“This election it was hard to do a big get-out-to-vote campaign for a campus where the majority of people aren’t registered,” said Monaghan. “So instead, we tried to focus on absentee ballots and voting in the location where people are already registered.”

According to Jackets Engaged advisor Julie Robinson, while the majority of BW students aren’t registered to vote, the percentage of registered voters on BW’s campus has increased in the past few years and puts BW in good standing compared to other schools.

BW has recently been awarded a gold seal rating for its 41.9% midterm election rate by the ALL IN Campus Democracy Challenge, an organization that encourages active citizenship and voter participation.

Jackets Engaged plans to increase voter registration rates through strategic planning that will take place as a result of BW’s pledge to the ALL IN Campus Democracy Challenge.

“A chief component of the challenge is to form a campus coalition that will create an action plan that we’ll turn in, in December, that will set some goals for the next five years,” said Robinson. “Just the act of that process will cause us to do more strategic work over the next several years. I think that will result in increased awareness and increased engagement.”

The coalition will be made up of members of faculty, staff, and student organizations, said Monaghan.

Jackets Engaged hopes to get faculty and staff talking about voter engagement to their students in a nonpartisan way, possibly through reminders in class or by sending out emails, which could be more effective than other methods, said Monaghan.

“People are more likely to listen to someone that they know than they are from a campus wide email,” said Monaghan.

The voter turnout overall for local elections tends to be lower than state and national elections for a number of reasons. One being that the majority of people aren’t paying attention to the issues that are being dealt with at the local level, said Dr. Tom Sutton, professor of Political Science.

“State and national involve issues that people are more aware of and can talk about and are more about differences in opinion,” said Sutton. “At the local level, cities fix roads, plow the snow, pick up the leaves, pick up the garbage, maybe host community celebrations. They’re not the kind of things that people have a difference of opinions about, so we don’t have big debates about them.”

Local elections, because of the nature of their issues, lead to nonpartisan races. However, some municipalities, like Berea, have one party that has a majority over the other.

The Democratic Party is the majority party in Berea. Parties—including the majority party—have the option of endorsing candidates in the local election, as seen in the election for Berea’s local seats, said Sutton.

“So, you didn’t see a D for democratic or an R for republican next to any candidate’s names on the ballot. But you did have candidates that were endorsed by one or the other parties,” said Sutton. “So, you knew that for instance Cyril Kleem, a mayor who was running for reelection, was the endorsed democrat. Mary Brown, his challenger, who is also a democrat, was not endorsed by the county party.”

“It’s a little different at the presidential level, but certainly in the congressional races and at the local level whether you’re part of an overwhelming majority or a minority the result is the same,” said Sutton. “It tends to depress voter turnout.”