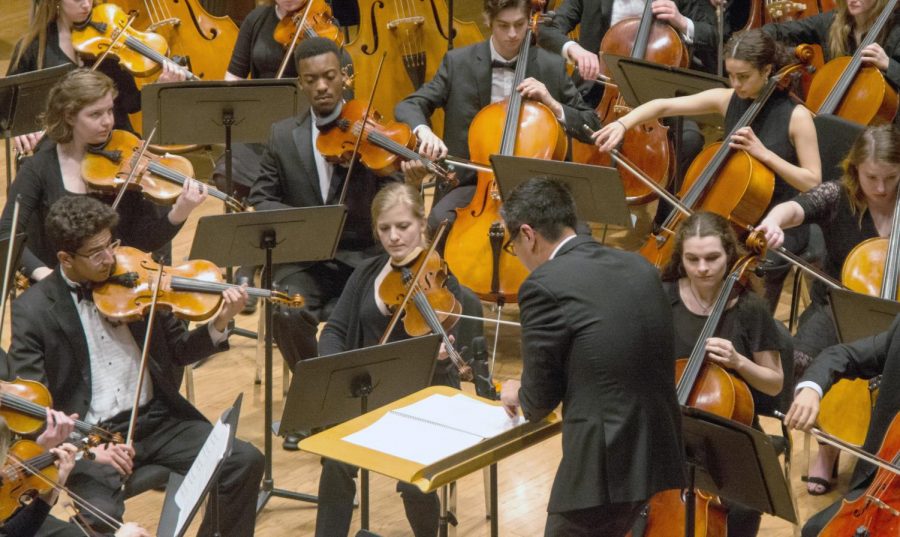 The celebration of the 50th anniversary of the Riemenschneider Bach Institute continues with its third event of the yearlong celebration called “Bach and Beethoven.”  This concert features the BW Symphony Orchestra and includes “Arirang Fantasy,” by Choi Sun Bae and “Symphony No. 7,” by Ludwig van Beethoven.

“I think it is a piece that has so many different characters,” said Han, “so many parts are reminiscent of an elegant dance, we find an incredible sense of humor in the third movement, we feel Beethoven’s angst, fear and frustration in the fourth [movement] but there are so many parts of the symphony that are heroic and hopeful, and that are just plain joyful.”

In partnering with the Riemenschneider Bach Institute, Han was able to look through a first edition score of Beethoven’s seventh symphony.  First edition means that this is the first time a work was published. While the work premiered in 1813 the first edition was not published until 1816.

Looking at the score from a scholarly perspective, there were many things that were present and not present, the best example would be that in the first edition Beethoven’s tempo markings do not appear, said Han.

Debates have been sparked because of the confusion over Beethoven’s articulation markings, specifically the debate over staccatos and dashes.

Beethoven has written in letters and points to the fact that his articulations matter and that they should not be the same, said Han.

“The reason that the confusion exists around that issue is because Beethoven, himself, is not very consistent about how he uses staccatos and dashes,” said Han, “so today we have come to the conclusion that they should be different but we do not exactly know how, and so a lot of performers make the best decision with whatever information they have.”

A lot of this controversy is because of how hard it is to read Beethoven’s handwriting on his autograph manuscripts.

Beethoven had terrible handwriting and his autograph manuscripts were a complete mess, said Dr. Christina Fuhrmann, professor of musicology and Editor: BACH Journal of the RBI, which made it hard for the publishers and led to them making many mistakes.

The program opens with “Arirang Fantasy,” a famous Korean folk tune that is thousands of years old and has many lyrics, said Han.

“The arrangement of Arirang that we are playing was made famous by the New York Philharmonic…when they performed this arrangement in the historic Pyongyang Concert Hall in North Korea,” said Han.

“Bach and Beethoven” concert will be on Nov. 1 at 7 p.m. in Gamble Auditorium.