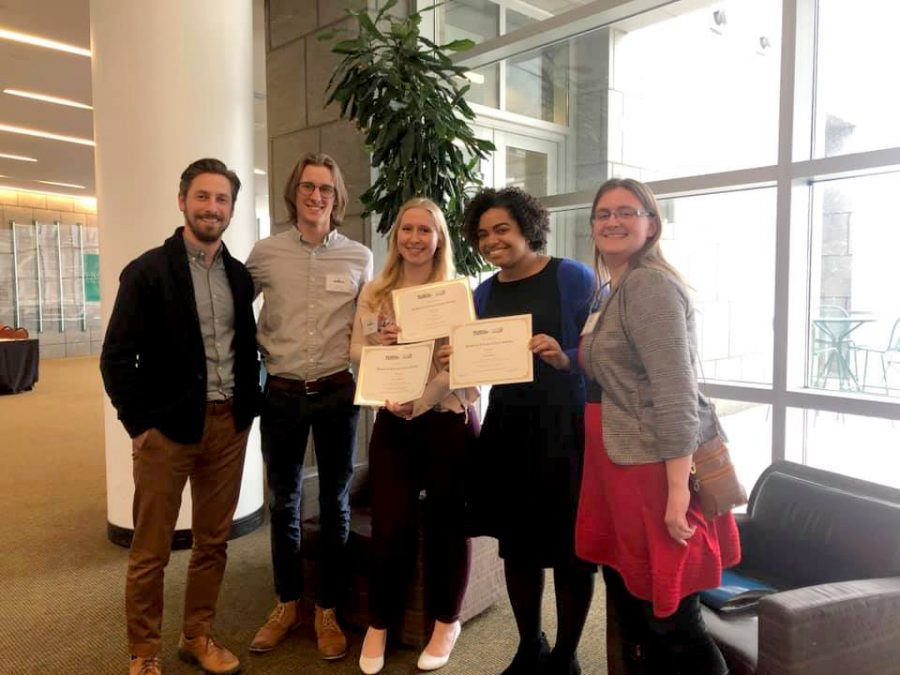 This semester, Baldwin Wallace’s very own student newspaper, The Exponent, and its staff have brought home seven awards from two collegiate journalism competitions.
The first competition, the 2019 Ohio News Media Association Collegiate Newspaper Awards, is open to college newspapers across Ohio. The Exponent competes in Division B, for papers at schools with 10,000 students or fewer, and won three awards: First Place in News Coverage, Second Place in Sports Coverage, and Third Place in Design. Additionally, Executive Editor Emma Selmon won First Place for In-Depth Reporting for her stories on Title IX at BW.
In an email statement, Dr. Brandon Szuminsky, assistant professor of journalism and faculty advisor of The Exponent, wrote that The Exponent placed as fourth best overall college paper in Ohio by ONMA’s scoring system, despite it only entering half of the competition’s categories.
The second competition was the Society of Professional Journalists 2018 Mark of Excellence Awards for Region 4. The competition, Szuminsky wrote, is for college papers within the four states of Region 4: Michigan, Ohio, Pennsylvania, and West Virginia. The Exponent was recognized as one of the top 3 Best All-Around Non-Daily Newspapers in that four-state region.
Two individual staff members were also recognized in the category for schools with fewer than 10,000 students. Selmon won the award for Breaking News Reporting for her article “Con students hold Sexual Assault Awareness Month rally,” and Managing Editor Amber Bills was a top three finalist in General News Reporting with her piece “Community opposition puts plans for new MCS&E building on hold.”
“It’s always great to see student work be recognized,” wrote Szuminsky. “For the work to be of such high quality and about such important topics is beyond gratifying. It’s acknowledgement that the [E]xponent does real journalism, even when it’s not necessarily flattering.”
Selmon’s winning story has advanced to the national competition for the Mark of Excellence Awards, where it will compete against the winning Breaking News Reporting articles from the other 11 regional competitions. The national winners will be announced at the SPJ’s Excellence in Journalism 2019 conference, to be held in San Antonio September 5-7.
Selmon said her winning Title IX articles were “challenging to write,” citing the complicated and emotionally taxing subject matter and the sheer amount of time and effort put into research and interviews for such an expansive and critical topic. In the end, though, she said, being able to share important, timely, and accurate information on these subjects with the campus community was also a reward in and of itself.
“That’s why the newspaper is important,” Selmon said. “It’s to get correct information out there, so people know what they should be upset about and what they shouldn’t be upset about.”
The Exponent also won awards in competition last year, said Selmon, and continued to bring in more this year, marking continuous improvement in the paper’s content and quality.
The competitions were “a chance to see how effectively the staff was doing as we began to implement substantive changes to the paper,” wrote Szuminsky. “We could both ‘check our work,’ so to speak, and also provide encouragement to our staff for their hard work.
About both the individual and full-paper awards, Szuminsky wrote that the staff’s hard work to provide news coverage “that is both engaging and ethically produced” has amazed him. The contests, judged by professional journalists following “exacting standards,” affirmed the achievements of The Exponent and its staff in recent years.
Much of that achievement has been thanks to the work of Szuminsky, said Selmon, and the professional experience and ample learning opportunities he brings to the table
Meanwhile, according to Szuminsky, the staff has been critical in bringing a once-ailing paper to new heights within a period of just two years.
“The students have to devote considerable time and effort to produce any student news product—the amount of work it takes to produce an exceptional one is even that much greater,” wrote Szuminsky. “That students have driven this turnaround in only two years time speaks to their commitment and drive to produce news that is of value to the [BW] community and makes the university proud.”