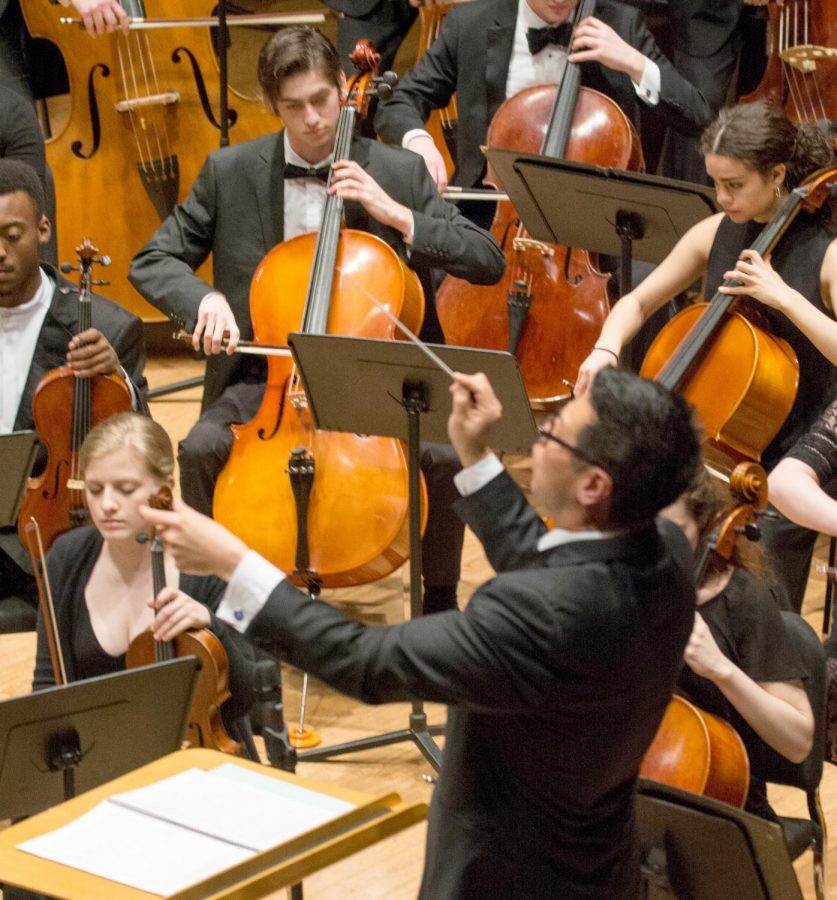 Baldwin Wallace University’s annual Bach Festival welcomed some new faces to the stage as the festival celebrated its 87th year this past weekend.
Known as the oldest collegiate-level Bach festival in the country, BW’s Bach Fest provides students, faculty, the Berea community, and professional musicians with an opportunity to celebrate the achievements and legacy of one of music history’s most beloved composers.
Unique to the 2019 festival, the Conservatory welcomed local Grammy Award-winning Baroque orchestra, Apollo’s Fire, to present Bach’s Mass in B Minor for Bach Fest’s main concert event Friday evening.
“This year, we ended up partnering with Apollo’s Fire,” said Erika Haskell, Conservatory concert and special event manager. “They were already going to be presenting the B Minor Mass the same weekend as us, so it made sense for us to collaborate… We’re really lucky to have them on stage.”
According to Haskell, this collaboration between Apollo’s Fire and Bach Fest marks the first since the festival came under the direction of Dirk Garner, chair of the Conducting and Ensembles Department.
BW’s Symphony Orchestra kicked off this year’s Bach Fest with their Thursday evening concert in Gamble Auditorium. Haskell said that the festival also featured a performance Friday afternoon by BWV, Cleveland’s Bach choir comprised of Conservatory and festival alumni.
Apart from local organizations, the internationally acclaimed Anderson & Roe Piano Duo was also featured during the festival. The partnership was set up, Haskell said, through BW Associate Professor of Keyboard, Sungeun Kim, who personally knows the duo.
“[This concert],” said Haskell, “[was] a co-presentation with Bach Festival and the Kulas Keyboard Series that we’ve had this year funded by the Kulas Foundation.”
As BW’s Bach Fest continues to evolve with new performances, Haskell said she enjoyed seeing new and returning concertgoers amongst all the changes.
“It’s fun to watch all that happen,” she said. “It’s like a little beehive of all these different people and their different experiences. We have patrons that are at every single thing…eight straight hours, three days in a row.”
But both Haskell and Craig Reynolds, Conservatory concert production and scheduling coordinator, agreed that the festival’s student involvement remains vital to the entire operation, and provides students a unique opportunity.
“The cool thing for our students is that they feel the honor…the prestige of the festival,” said Reynolds. “We have so many things that happen here throughout the course of the semester, that you kind of fall into a routine. Then this kind of weird thing comes along and it’s Bach Festival. There’s all of this special stuff that happens over the course of five days.”
However, some students were upset with the extent of student involvement in Bach Fest this year, believing that students are being excluded more than ever.
“My freshman year, many students were involved in Bach Fest, in the choral ensemble, as well as the orchestra,” said Maeve Barton, a senior music education major and former member of the University and Motet Choirs. “There were fewer students sophomore year, and last year, my junior year, it was only Motet Choir and an entirely professional orchestra. This year, students weren’t even given the opportunity to perform the large work,” Barton said. “Four students were picked, with no auditions, to perform with the professional group, and everyone else was not able to perform.”
Performed Friday evening, this year’s major work, Bach’s Mass in B Minor, was comprised almost exclusively of members from Apollo’s Fire, prompting Barton to write a letter to Conservatory administration.
“I was unhappy with the situation this year,” said Barton, “and as a senior, I have nothing to lose to reach out to the people in charge to see if there’s a way to institute a change.”
This letter to the administration, she said, received 20-25 signatures from students, two faculty signatures, and six from parents. Barton said she fears that future Bach Fests may eliminate student performances altogether after what she has seen during her time at BW.
“One student, who gave me a statement, said that Bach Fest was one of the biggest contributors to them choosing to attend BW,” she said. “I think if the administration listens to what the students are saying, then there’s a chance to turn Bach Fest around and make it about student opportunities again.”