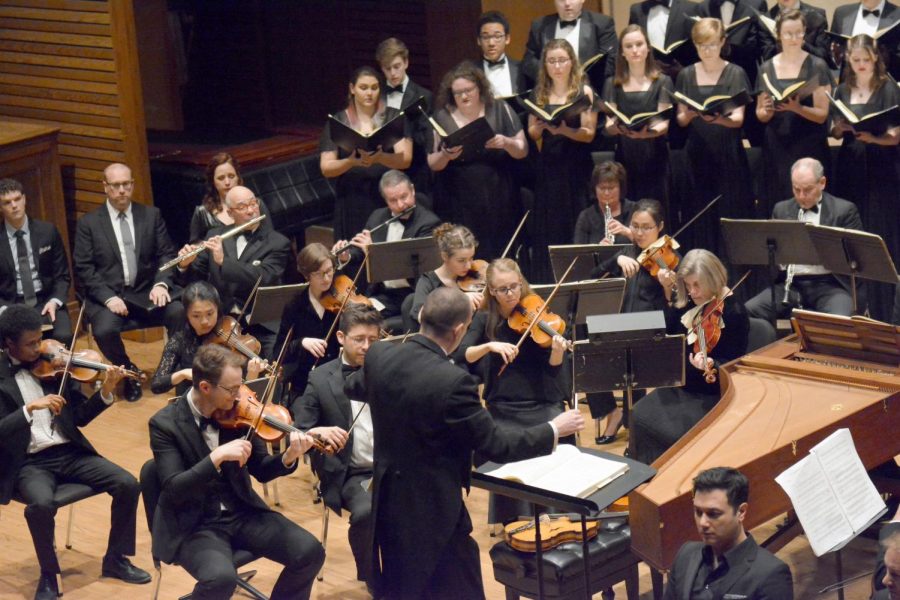 With a nearly 90-year history, the annual Bach Festival is returning to the Baldwin Wallace campus April 11-14.
Erika Haskell, manager of concerts and special events, states that the festival has the same four-year rotation that former conducting professor, Dwight Oltman, used.
“Dr. Garner will occasionally veer from that for programmatic reasons,” said Haskell, “but always the four major works are at the heart of the festival.”
This year’s main work, J.S. Bach’s Mass in B Minor, will be performed by the Grammy Award-winning baroque orchestra, Apollo’s Fire. Jeannette Sorrell conducts this work on the Friday night of the festival, despite the major work historically being performed on the Saturday night of the festival.
“This is the first time we aren’t actually doing one of the major works,” Haskell said. “Apollo’s Fire is doing it; Apollo’s singers are doing it.”
Conservatory students have made their frustration known about not being able to perform the major work for this year’s festival. Haskell notes that due to conflicting program schedules, it made more sense for Apollo’s Fire to perform the major work this year.
“I have heard a lot of that frustration,” said Christina Fuhrmann, professor of music history and literature. “I’m actually sort of glad that there’s frustration, because that tells me that Con students really love the Bach Festival and want to be a part of it.”
She said she believes this is a one-time coincidence, and students will be performing the major work in the future.
The events of the festival will range from musical performances, master classes, and lectures.
Senior music theory major, Lindsay Rader, is the 2018-2019 Riemenschneider Bach Institute student scholar, and she will be presenting her research on Otto Singer’s markings in his copies of Richard Strauss works and Richard Wagner works on Friday evening.
Soprano Alissa Ruth Suver, from the Grammy Award-winning choral ensemble Conspirare, will work with students during a masterclass on Saturday. The traditional festival brass will be performing at the Marting Hall Tower under conductor John Brndiar. On Saturday, the BW Motet Choir will be performing some of Bach’s lesser-known cantatas at 7 p. m. in Gamble Auditorium. The BW Singers will close the festival out with a Bach Service at The United Methodist Church of Berea.
The BW community has the opportunity to attend all of these events. There are four ticketed events, Suites and Motets, Apollo’s Fire, Anderson and Roe Piano Duo, and Jesu, meine Freude, that students can purchase at the Conservatory or at Kleist for $10.
“I think that the music of Bach just never seems to get old,” said Fuhrmann. “I think Bach still really speaks to us today…BW is always finding new ways to connect Bach to the world…I think there’s something for everyone.”

This year’s Bach Fest will feature food trucks and interactive experiences in addition to live musical performances. To learn more about the events visit www.bw.edu or contact [email protected] for more information.