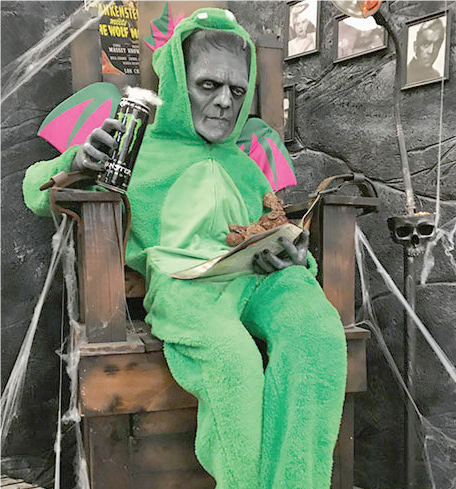 The Frankenstein Festival includes displays in Ritter Library, a variety of lectures and discussions and a read-a-thon in late October.

Two centuries have come and gone since the publication of Mary Shelley’s Frankenstein, and Baldwin Wallace is celebrating.

In 1818, the world got it’s first look at Shelley’s haunting tale, sparking discussions about what it means to be a human, and a monster, that still prevail today.

To commemorate this milestone, faculty, staff, students and members of the Berea community are coming together to host a Frankenstein Festival, complete with an exhibit, faculty lectures, book discussions and showings of the movie.

The festival kicked off on Sept. 6 with the opening of the Frankenstein exhibit in Ritter Library and a discussion led by Joe Tarantowski.

The festival continued during the next two weeks with a showing of Boris Karloff’s movie adaptation and a presentation by Conservatory professor Gene Willet.

And festivities do not stop there. Within the coming weeks, some of BW’s finest are taking the stage at Ritter Library to lecture on the enduring themes found in Frankenstein.

On Oct. 11, Philosophy professor, Kelly Coble, begins the lectures by discussing the ethical legacy within the novel.

Coble describes the classic as one that challenges readers, particularly because the content frustrates their attempts to read the story as a “moral parable.”

“Shelley’s monster, as conjured in her reader’s imagination, is at once far more hideous, terrifying, and savage than the monster of popular culture and also far more noble, beautiful, and rational,” said Coble.

She goes on to explain that this oxymoronic representation of Frankenstein’s monster lends itself to what is often a great, yet forgotten, part of Romantic Nature Philosophy.

Carrie Davis Todd, a professor of Geology, is also lecturing in Ritter on Oct. 17. Her lecture will be science-based, but with a surprising twist.

She will be discussing the eruption of Mount Tambora in Indonesia, a seemingly unrelated event to Frankenstein. But the effects of this volcano are more important than they appear, she said.

“Mount Tambora in Indonesia caused global weather patterns to change the following year,” Todd said. “Mary Shelley travelled to Lake Geneva, Switzerland, with friends and spent much of the summer indoors due to the poor weather…inspired by the lightning from the storms and incorporating her interest in reanimation, Mary Shelley created the framework for the story that would become Frankenstein.”

The final Ritter Library lecture will take place on Oct. 25, with English professor Ana Boe’s presentation on the technological legacy of Shelley’s novel.

Boe said that she will be discussing Shelley’s worries regarding the moral implications of using technology to “create a new class of beings.” She will also be discussing other novels that deal with the same issues, and how “Shelley—and the contemporary writers who take up her Promethean themes—argue for the dignity and equality of all beings.”

For more information on the festival, visit the BW website, https://www.bw.edu/events/2018/Fall/09-Frankenstein-Festival.