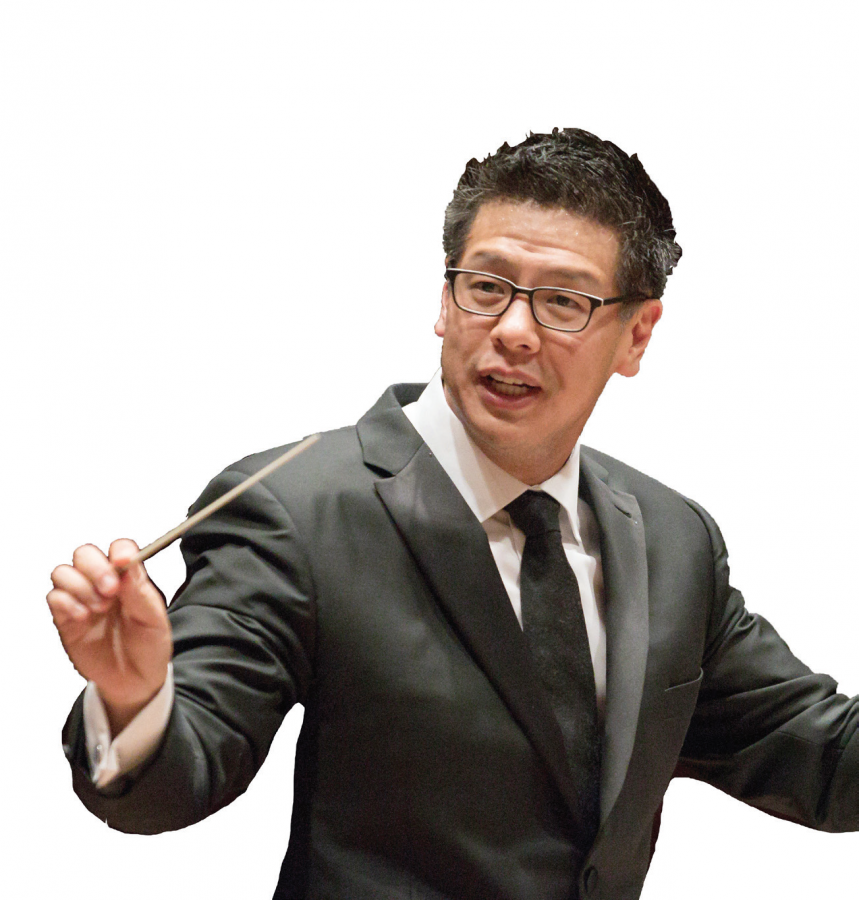 The Conservatory welcomes a new maestro into its concert hall—the third in the past three years.

Soo Han, director of orchestral studies and associate professor of conducting, is taking his turn at the conductor’s podium. However, Han’s approach is different from what one might expect of a conductor.

“I really like the fact that he’s trying to get personal with the orchestra immediately. He’ll take his time out of the beginning of a rehearsal to come and actually say ‘hi’ to us,” said senior bassoonist, Sarah Strasinger.

Using terms such as “colleagues” to indicate a level of equality between him and the students, Han waltzes down the side aisle of Gamble Auditorium greeting the players before rehearsal. To those who are already on the stage warming up, he goes up to them individually and shakes their hand firmly.

Music has been an important part of Han’s life. He immigrated to the United States with his family at the age of 10 from Seoul, South Korea. He attributes his parents as his heroes for achieving their “American dream” in owning a business. This has helped him to achieve his dream of becoming a music professor, he said.

Han had an inclination that he would be a conductor from the very beginning. In Seoul, he started playing the piano at nine-years-old.

“I knew I wanted to be a conductor specifically,” he said. “I was the kid that was rearranging furniture in the family living room, pretending the ottoman was the violin section, the speakers were the trumpet section, and the plant was the string bass section. I was gesturing and making cues. I had no idea what conducting was, but I knew it involved pointing to things.”

For Han, he loves being a conductor because it allows him to bring people together toward a common goal.

Dean of BW’s Conservatory of Music, Susan Van Vorst, commented on his energy for collaboration and community: “When he enters a room, the whole room lights up.”

All the candidates for this position went through a thorough application process presented by a four-member faculty search committee, headed by Julian Ross, chair of the Instrumental Studies Department and professor of violin.

A teaching component, time with the search committee, a forum with the faculty, and a rehearsal with the BW Symphony Orchestra comprised the selection process, and Han was the chosen candidate.

Van Vorst noted that he has plans to strengthen and make the orchestra excel in the coming years. Han wants to include more representation by female, minority, and immigrant composers to the orchestra’s repertoire to reflect the Conservatory’s and the BW broader community’s identity.

In addition to new and diverse repertoire, he hopes to give his students “the tools and courage to be authentic interpreters of music.”

Van Vorst expressed her full trust in his determination, describing him as “exuberant, joyful, and committed.”

To witness his collaboration and commitment to the Conservatory and students, you can see Han conduct the Baldwin Wallace Symphony Orchestra in Gamble Auditorium on September 21 at 7 p.m., featuring works by Beckel, Beethoven, and Bernstein.