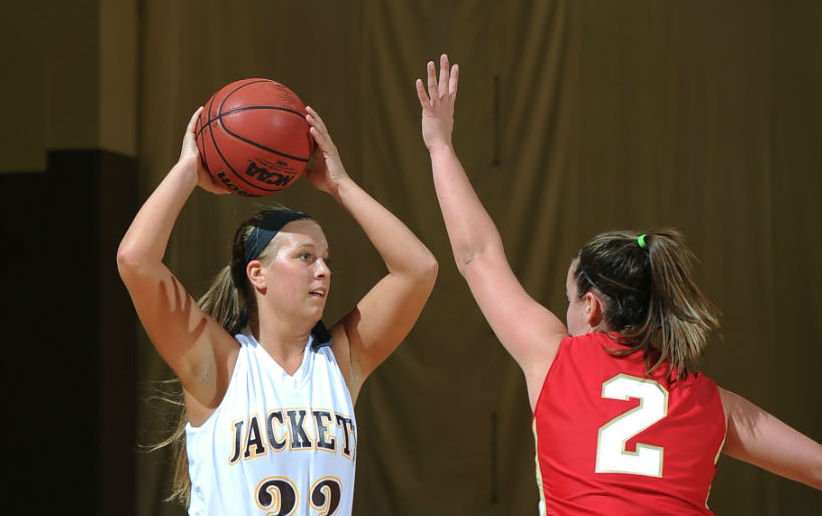 The success of a student-athlete is greatly influenced by the source of drive and motivation that is present in their career, both on and off the court.
For senior guard Jessica Carpenter, motivation comes from all sorts of directions; from parents to teammates to her pregame caffeine.
Carpenter has earned three varsity letters in her four seasons on the Baldwin Wallace University women’s basketball team.
She is a Dean’s List student, carrying a better than 3.29 grade point average throughout her academic career at BW.
The foundation of Carpenter’s success lies in her upbringing. The Business and Health Care Management major was introduced to the game of basketball by her father, Terry Carpenter.
“My dad was the person who got me into basketball and is always
there to help me work on my game,” Carpenter said.
Her father and mother have been in the crowd at nearly every game in her career, watching and motivating her to play her best.
She continued to say, “My mother is the best supporter I know and both haven’t missed more than three games in my whole basketball career. They are the nicest, most encouraging and influential people in my life and in anything I do.”
Carpenter believes that her passion for the game is what makes her stand out from the rest of the student-athletes at the Division III level.
“I think my love for the game and the intensity I bring to my performance is something that not everyone has,” Carpenter said.
According to the BW Sports Information Department, as a sophomore, Carpenter was named
second-team All-Ohio athletic Conference. As a junior, she earned second-team all-OAC for the second straight season.
“Jess is a fierce competitor. You always can tell the outcome of a game from her emotions, and they aren’t based on her individual performance,” said senior Assistant Student Coach Jon York.
In the pre-season of the 2012-2013 season, Carpenter’s senior year, she suffered a broken finger. Carpenter missed the first four games of the season.
With the help of her senior class and the rest of her coaches and teammates, she fought back.
“Jess always strived to succeed and is such a hard worker. She is one of those athletes that you never want to graduate. Her competitive nature is contagious to her teammates. Despite injuring her hand, she never complained,” said Assistant Coach Adam Bailey.
Carpenter said, “My fellow teammates, Rachel [Rossman] and Megan [Frisina], are two of my
best friends that I have made here at BW. [We] three got each other through the four tough years of our basketball careers and I will forever cherish the memories I have made with them.”
Carpenter earned a spot in the starting lineup upon returning to play and never looked back.
Her best game of the season occurred in a win against Marietta College.
She scored 15 points, shooting a remarkable 71 percent from the field. With her success in this win, and in the team’s win against Carnegie Mellon (Pa.), Carpenter earned OAC Player-of-the-Week honors.
Carpenter said, “I scored a solid amount of points, did my job on defense and had a positive assist-turnover ratio.”
“We always put her on the toughest defensive assignment and she plays shut down defense – no questions asked,” said Coach Bailey.
Not only is she motivated by her team and loved ones, Carpenter is a motivator for her fellow Yellow Jackets, even after the completion of her senior season.
“Always give 100 percent in everything you do because you don’t want to regret not giving it your all. Also, enjoy the time you have with your teammates because it goes very quickly and the memories are what you are going to remember most when your career is over with,” she advises her underclassmen teammates.
“She [Carpenter] was a crucial part of our success this year, both on the court and her leadership of the team,” said senior teammate Megan Frisina.
Since Carpenter was seven years old, basketball has been a passion for her.
She earned four varsity letters at North Canton Hoover High School and knew that she wanted to continue her career at the collegiate level.
She said, “I didn’t want to go to any other division than D-III. I didn’t want the game I loved to feel like a job, rather I wanted to enjoy it and have fun.”
Carpenter fulfilled her dream of enjoying Division III basketball at BW. According to BW SID, she wrapped up her senior year with eight points, two rebounds, and one-and-a-half assists per game.
Maybe her success comes from her support from her team, family, and friends. Or maybe, it comes from her pregame caffeine fix.
“As crazy as it might sound, the past two years I would either drink a five-hour energy shot or cup of coffee before each game,” Carpenter said.
Baldwin Wallace University will never truly know what drove Jessica Carpenter to be so successful, but her career is in the books as a success, both on and off the court.