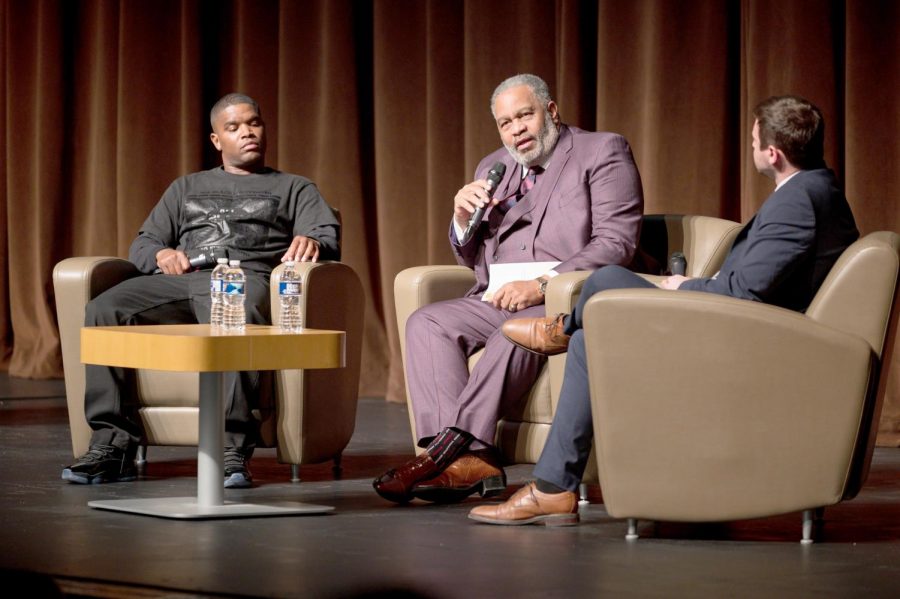 A week of events examining and honoring the legacy of Martin Luther King Jr. was headlined by a panel discussion featuring two survivors of what many describe as America’s unfair criminal justice system.

On Tuesday, Jan. 21, Anthony Ray Hinton, who spent 30 years on Alabama’s death row for murder despite exculpatory evidence pointing to his innocence, and Kuntrell Jackson, who was sentenced to life without parole at 14-years-old before the United States Supreme Court ruled his sentence unconstitutional, spoke with Equal Justice Initiative attorney Adam Murphy at Kleist Center for Art & Drama.

The night, titled began with a speech given by Hinton, alone at the podium, in which he described his experience of being wrongly accused of capital murder and his struggle to prove his innocence in court. After 30 years in prison, he was exonerated due to work by Montgomery, AL lawyer, Bryan Stevenson, director and founder of the Equal Justice Initiative, a non-profit law firm which represents prisoners who were in some way denied a fair trial.

“Everyone in the audience was just spell bound,” said Jay T. Hairston, associate diversity officer for the BW Center for Inclusion. “[The audience was] locked into every word Mr. Hinton had to say.”

The event was presented as a joint effort by BW’s MLK Week Planning Committee and the Enduring Questions: The Mark Collier Lecture Series committee. Hairston, a member of both committees, called the event a “phenomenal program.”

The event coincided with the release of the feature film, Just Mercy, an adaptation of Stevenson’s best-selling memoir about his work to overcome institutionalized racism and political maneuvering to defend wrongly accused prisoners, and the founding of EJI. Jackson, now a working actor and community educator, appears in the film.

As part of the event and Baldwin Wallace’s commemoration of the Martin Luther King Jr. Week celebration, a private screening for the BW community was held. Eighty-two students, faculty, and staff attended. Free tickets for the panel discussion were sold out a week and a half in advance of the event.

Chief Diversity Officer, CJ Harkness, credits the university’s social awareness for the high attendance at these events.
“I think it says we have a critical mass of people on our campus and in our community, who take seriously the idea of social justice and equity,” Harkness said. “And what is encouraging to me is that we have offices, whose primary charge is not diversity and inclusion, who have as a core value of the work that they do, diversity and inclusion.”

According to Harkness, hearing the stories as told by Hinton and Jackson offered an opportunity for BW students and faculty to engage directly with important issues related to the criminal justice system in America.
“To be able to hear someone’s specific story of how a system goes so wrong, and then be able to learn how, unfortunately, they aren’t just the one-time [occurrences], is important,” said Harkness.

To that end, the event was also integrated with some academic activities on campus, Harkness said.
“Some classes had assignments based the lecture itself,” he said. “I think that there will be multiple groups who have follow-up discussions and conversations afterwards.”

During the panel, Hinton addressed white audience members specifically, imploring them to acknowledge and fight the ways in which the American criminal justice system has been built to institutionally disadvantage black Americans.

“We are dealing with a new type of slavery,” Hinton said, in reference to over-policing and mass incarceration in black communities. “The justice system is built to make [white Americans] believe that all [black Americans] do is commit crimes.”

Harkness believes that it is important for members of the BW community to learn about the experiences of people like Hinton and Jackson and use that knowledge to advance causes of justice and equality.

“Each of us have the opportunity to recognize when systems are benefiting one group and not another, and advocate for those who are being marginalized,” said Harkness. “Get the information, find the inspiration, and carry out good work to help make our world a better place.”