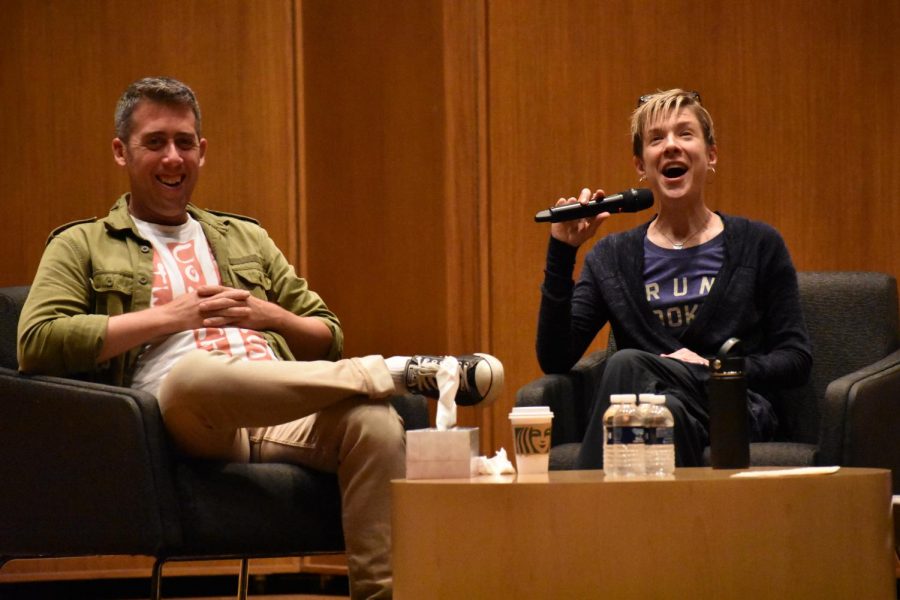 9 Horses ran wild at the Baldwin Wallace Conservatory of Music for a week this semester. (Hint: they aren’t actually horses, they’re musicians.)

The group consists of three musicians—Joe Brent, mandolin; Sara Caswell, violin; and Andrew Ryan, bass. Brent, who sits at the forefront of the group said the name came from a Billy Collins poem, Nine Horses.

Brent originally was in contact with Dean Susan Van Vorst, and academic residencies similar to this are “the bread and butter of what we do,” said Brent. He was asked to compose a piece for 9 Horses to perform with the BW orchestra as part of a larger set.

In addition to the original composition, the performers were able to teach some classes on composition, strings, being a professional artist and more.

“At the end of the day it’s chamber music. We interact like a chamber ensemble with a few distinctions, probably most prominently being that we improvise pretty regularly,” noted Ryan.

Most of the pieces the group performs are composed by Brent, said Caswell.

Brent said that he identifies the trio as a “post-genre” group based on different musical components from blue grass to jazz to international influences.

“You create the music that brings all those different styles together,” said Caswell.

Caswell thoughtfully noted that each of them plays a different part in the group and in other groups they are part of, from being the bandleader to taking directions to being fully collaborative. That translates to the type of music they play.

The group noticed there was a craving from the Conservatory students to learn more than just Western classical music, like most American music schools teach. The administration noticed, too, and that is how 9 Horses began collaborating with BW.

With the group on campus, the experience from the beginning was “inspiring.” Being honest and transparent with the students is “one of the best ways we can serve [them],” said Caswell.

The residency included many classes, performances and interactions between 9 Horses and the students.

The final experience included the orchestra concert on Friday, Sept. 27, with a specially composed piece called “Dream in Plastic,” a piece composed by Dr. Clint Needham, composer in residence and associate professor of composition, called “Flourishes,” and an accompanying program piece, “Appalachian Spring” by Aaron Copland.