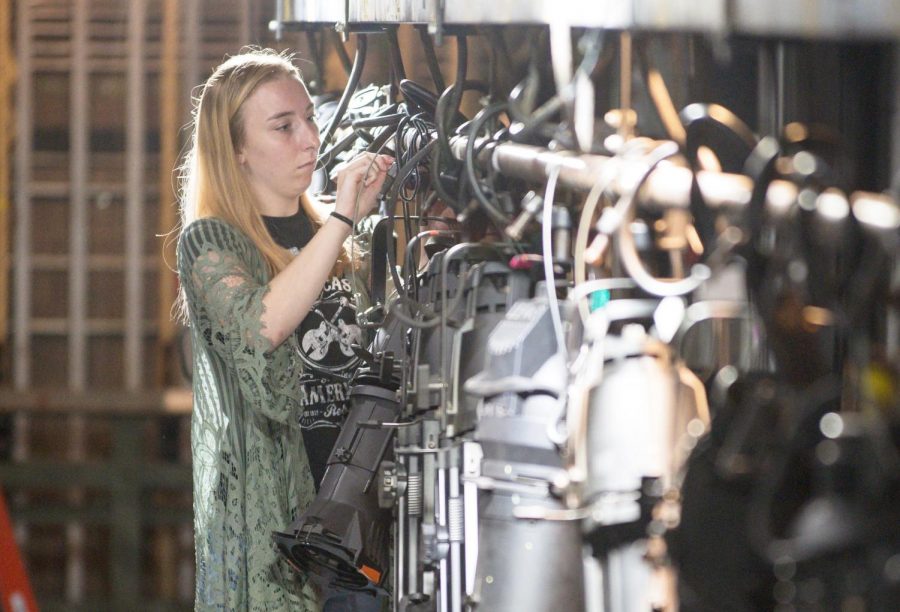 Mold growing in theater and production spaces in Kleist Center for Art and Drama led to delays in theater productions and disruptions at the start of the semester.

The mold was found in the Black Box Theatre the week before the semester started, the result of hot and humid weather during a maintenance related shutdown of one the building’s HVAC system, according to Bill Reniff, vice president for Finance and Administration.

There are five separate HVAC systems in Kleist, Reniff said, and the one for the Black Box Theatre required maintenance over the summer to replace a heat plate, which helps to remove moisture from the air. The replacement part took eight days to arrive, a period when the weather was incredibly hot and humid, he said, and the moisture that developed during that time the system was shut down likely led to the mold. The crews repairing the HVAC system first noticed the mold during the replacement of the heat plate, Reniff said.

The extent of the mold growth became apparent shortly before the start of the semester, said Scott Plate, associate professor and chair of Theatre and Dance.

“When we opened them back up to prepare for Weekend of Welcome activities,” Plate said, “we discovered that in the HVAC shutdown and room closures and humid temperatures, a tremendous amount of humidity had built up in the Black Box Theatre, where mold had begun to sprout on a lot of the chairs.”

The problem was diagnosed before the students returned, so no one was put at risk, Plate said.

Belfor, a recovery company with expertise in mold remediation, was brought in to clean the theatre and test the building. According to Reniff, the university’s insurance covered the remediation, minus the typical deductible.

The Belfor crew tested the air quality of the theatre and the building at large. While mold spores were detected in the air of the Black Box Theatre on the initial test, the second test following remediation found no mold in the theatre or elsewhere in Kleist.

“As a safety precaution we tested the entire building and all of the air came back good,” he said.

The affected HVAC is not connected to the larger system so it could not draw air from the Black Box into the rest of the building, he said, but the second test confirmed that was the case.

Despite the current state of the theatre being safe, the discovery of the mold created different problems for the Department of Theatre and Dance, including schedule changes for shows and the cleaning and placement of the hundreds of costumes stored in the lockers inside the Black Box Theatre.

After discovering in the mold on the Black Box chairs, department faculty began looking for other areas affected.

“When the mold was discovered, at first we had hoped it would be localized to the seats it was found,” said Tesia Benson, associate professor of Theatre and Dance and costume designer. However, she quickly realized the issues extended to storage areas inside the theatre.

“We have a lot of costume storage upstairs, so we thought, ‘Well, if it’s that damp, we should see what’s going on there,’” she said.

Cabinets were opened, and it was found that everything was damp, but only a few costumes had mold on them. The room that held the costumes was shut down and all the costumes were removed. From there, staff determined which costumes were a priority and had them dry cleaned, Plate said. The affected costumes were cleaned by a specialty cleaner who specializes in mold remediation, Reniff said.

The Black Box Theatre has been inaccessible for the past month, resulting in delays for a number of shows and Theatre classes that use the space for in- and out-of-class learning.

In terms of show production, things have come to a standstill, Benson said. The first show of the season, “Uncle Vanya,” was supposed to begin the technical run on Sept.30. Since the Black Box and storage areas have been off limits, the show has now been moved to January, she said.

“It puts us in a little bit of a bind,” said Benson. “The costume shop, because of where we store the type of clothes that the show uses, has just been working on ‘Uncle Vanya’ as though it were going to open at the same time.”

The scene shop, however, had to stop all work on “Uncle Vanya” immediately and put it to the side until the production picks up again.

While the process of mold remediation took several weeks to treat the problem, Plate said, the treatment was finished a week earlier than anticipated. Air samples of the building were taken and found to have less mold spores than the air outside, Plate said.

“We are relieved to know that the university prioritizes student comfort and safety,” said Plate, “and our sincere wish is that is always the first priority.”

The Exponent staff contributed to this report.