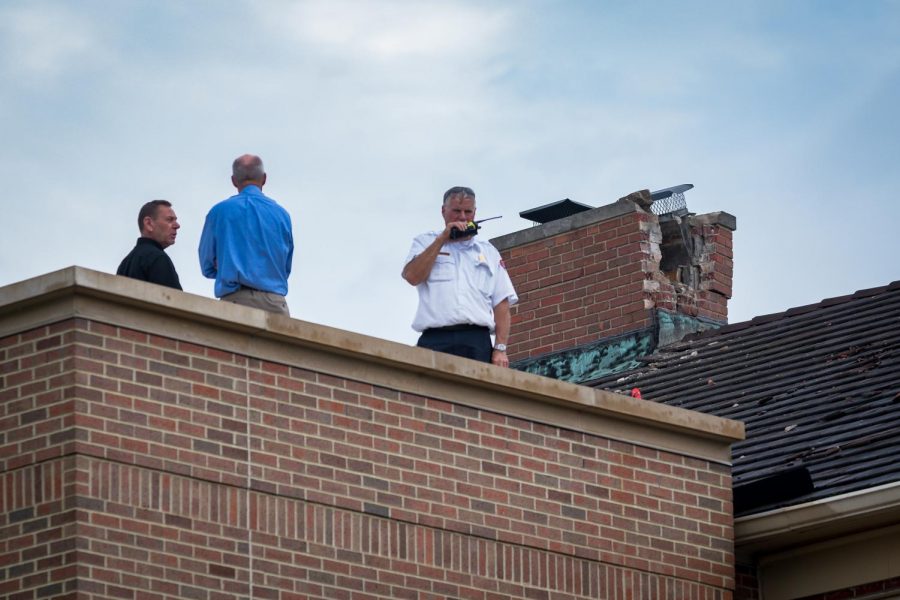 The Fall semester at Baldwin Wallace University started with a bang – literally.

On Aug. 6, exactly a week before student-athletes were intended to move into their dorms, lightning struck the chimney of Saylor Hall, igniting the insulation and bellows in the attic.

Bill Reniff, vice president for Finance and Administration, said that the lightning “spiderwebbed” across the roof, blowing bricks into the adjoining parking lot and yards.

No one was in the hall at the time of the incident, according to university officials.

First responders from four fire departments in the area reported to the scene. Kyle Woodie, a firefighter and paramedic with the Berea Fire Department who was one of the first people on the scene, said it was put under control quickly.

“The first people on the scene found where the smoke was coming from pretty quick, so we were able to get to it fast,” said Woodie.

The blaze charred a small portion of the insulation and wooden beams in the attic and filled the top two floors of the hall with smoke before being completely smothered. First responders were able to extinguish the flames without the use of water.

“It was basically smoldering when we got up there,” said Woodie, “Luckily we caught it quick; otherwise, once the attic goes, it could be the whole building.”

The building was struck during a two-week period set aside for BW residence life staff to prepare all of the dorms for incoming students. Throughout the summer months when BW students have moved out of the dorm, rooms in Saylor Hall are filled with summer campers and other conference attendees. Once these camps have concluded, staff have a two-week window to prepare the dorms for student-athletes, who move in approximately two weeks before fall classes begin.

Dan Karp, assistant vice president of University Relations, said the timing of the lightning strike coming during that two-week window meant no one was hurt.

“We were fortunate that at the time nobody was in the building,” Karp said while on the scene in August. “Next week some football players were assigned to it, but they will be moved to another building temporarily.”

At the time of the strike, smoke filled the top two floors, triggering the fire alarm system at approximately 3:45 p.m. At this time, only students involved in Residence Life were on campus, preparing for the incoming students. No students were in the building at the time of the incident.

By the time Reniff and Senior V.P. Richard Fletcher had arrived on the scene, the fire departments from Berea, Middleburg Heights, Brookpark, and Cleveland Hopkins Airport had responded. Due to the quick signal from the alarm system, Berea’s assistant fire chief was able to put the fire out using an extinguisher found on the third floor of Saylor. The university was fortunate there wasn’t more substantial damage, said Reninff.

“If water had been used, we would’ve had a massive renovation and rehab to do,” said Reniff.

According to Reniff, the process of extinguishing the fire was finished within 20 minutes of the strike.

Beyond the water damage, the situation could have been much more serious, possibly resulting in the entire building being engulfed by flames, if the fire alarms hadn’t responded so quickly.

“We were very lucky,” said Fletcher. “It’s nice when you have an incident like this that you know the system works.”

The system worked so well, in fact, said Reniff, that it wouldn’t turn off. In the days following the fire, the circuits, cables, Wi-Fi and more around the university were fried, as the emergency power generator was on for an extended period of time.

Reniff said that the disaster caused about $60,000 worth of damage in total, all of which was covered by the school’s insurance. Belfor, a disaster recovery company that is connected to the university’s insurance company, sent a crew to Saylor within an hour and a half of the disaster to clean and restore the hall.

The last renovation was completed on Aug. 19, as the sandstone cap for the chimney was not rebuilt until then. During the week before the construction, students received an email from the Parking Office stating that the Marting Hall parking lot was to be empty on that day so the crane necessary for the operation could be delivered.

Fletcher said he was interested in knowing why the lightning was specifically attracted to the chimney of Saylor Hall. Marting Hall, which is situated right behind Saylor, is much taller and has an attached copper tower atop it.

“You would’ve thought that would be the more attractive destination point for lightning,” he said.

Both Reniff and Fletcher said that there should be no lasting effects of the fire; that is, unless another lightning bolt strikes the building.

“No matter how well you think you’re prepared,” said Fletcher, “natural accidents happen like that, and a lightning strike is a very powerful thing.”