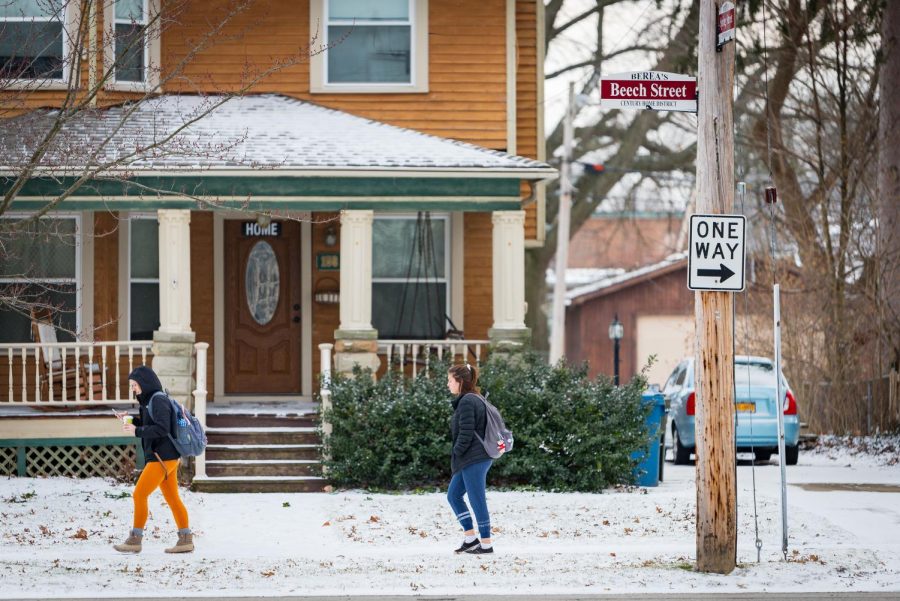 Shoveling snow is hard work, especially in the treacherous weather conditions that Berea, Ohio may see in the winter. Baldwin Wallace’s Department of Buildings and Grounds has been dealing with this first-hand.
It’s a mystery, said Keith Lawson, grounds foreman for Buildings and Grounds, when it comes to the weather in Ohio, but the Buildings and Grounds Department at BW is always prepared.
On Jan. 30 and 31 BW, faced a snow storm and an extreme drop in temperatures, resulting in class cancellation. BW’s B&G’s team was prepared for the storm, instantly providing safety for the students to commute. Efforts from the team of 10 at laying down salt on sidewalks and shoveling could not address all of the poor sidewalk conditions within the campus area.
The sidewalks connecting BW’s North and South Campus are often the most dangerous walkways for students during bad weather, said Lawson, because they are mainly private property. This is an issue that has continued to raise concerns from students at BW because they aren’t able to get to their classes without running into icy and snowy sidewalks.
“Every year varies when it comes to the number of complaints we get about the sidewalks not being cleared,” Lawson said. “This year, we had an astonishing estimate of around 20 complaints in a two-day period.”
There are three main streets that see a majority of student traffic: Tressel, Beech, and Seminary street. Most students don’t realize that Tressel is the only street that is completely owned by the University. In order to promote safety, Lawson said B&G’s recommends that students use Tressel to get to and from North and South Campus.
“There are a lot of privately owned homes that surround campus, prohibiting the slightest touch to their property,” he said. “My team and I would be willing to take on the extra work and clean off their sidewalks for the safety of the students, so it’s a shame we can’t do anything about it.”
Many years ago, the B&G’s crew at BW had the right to shovel and ice the turf of homeowners on campus, but got complaints that they were ruining the privately-owned yards, said Lawson, which lead to tension between the homeowners and the University.
“We have made efforts in the past, but most homeowners didn’t respond well,” Lawson said. “Now it’s such a touchy subject with the law and a hard situation to enforce and something we don’t want to take the chances in messing with.”
Though winter has just begun, said Lawson, the unpredictability of weather is always an issue, so keeping up with it is very important to the B&G’s team.
“We get up around four or five in the morning to salt and plow everything to the best of our ability,” he said, “so by the time the students wake up, it’s done. In the end, the safety of the students is our main priority.”