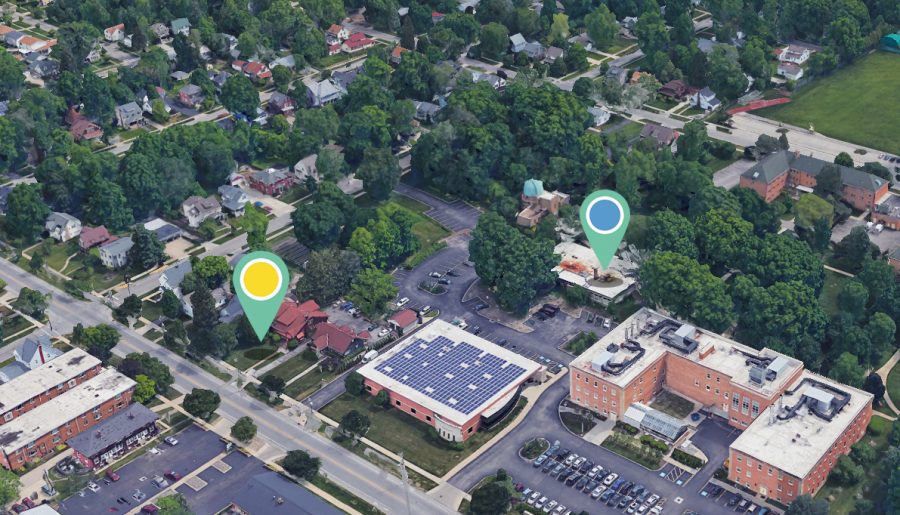 Plans for Baldwin Wallace University’s Math, Computer Science, and Engineering building (MCS&E) have gone back to the drawing board once again

The Berea Planning Commission rejected the University’s revised the MCS&E building proposal at their meeting on Dec. 20. That decision followed the rejection of the original plans presented Aug. 16 in which the University sought approval of several waivers. The Planning Commission, which includes the mayor of Berea, have said that parking, location, and other zoning elements remain unresolved issues for the MCS&E.
Now, BW is again working with architects to create a site plan to address the city’s concerns. The proposed building will now be located on or near the site of Ward Hall in the North Quad, between the Center for Innovation and Growth and the Burrell Observatory.
The original proposed site was on Front Street and 5th Avenue, and Richard Fletcher, senior vice president of BW, said “some people are not on board in general because of the size and scope next to a residential area.”
In particular, said Fletcher, residents in the area have raised concerns about limited parking space and traffic flow into the neighborhood. In addition, the size and location of the building remained an issue for residents.
The city’s decision has a tangible impact on both the budget and the schedule of the proposed replacement for the aging Math and Computer Science (MACS) building.
Following the initial rejection, Fletcher told The Exponent that efforts to accommodate the changes needed for approval would increase MCS&E’s cost from $20 million to $24 million. The building is funded by donors, including the $4 million increase, he said.
However, despite a second proposal which included changes to the building’s appearance and additional parking to address concerns, it still wasn’t approved by the Planning Commission.
“The two primary issues they had raised were the exterior look of the building and parking issues,” said Fletcher. “And so we made revisions to the plan and thought we were addressing those issues adequately. But evidently there was strong enough belief that its scope and size and location, which would’ve required a variance from the code, was still sufficient that it warranted their action to not approve the plan.”
Following the second rejected plan, Bill Reniff, vice president of finance and administration, said the obstacle appeared to be simply about size. The building proposal indicated MCS&E to be about 56,000 square feet, with a full basement and two stories above ground.

“The neighbors got concerned that it was just too massive of a building on that corner, a residential corner,” Reniff said.
Since the December Planning Commission meeting, adjustments to the plan have been aimed at addressing the concerns of the commission and community members.
In an official statement, BW said, “The University is scheduled to share new, rough schematics for informal review by the Planning Commission later this month. A more comprehensive revised project proposal and formal vote could come in April.”
Reniff said that the potential new plan for MCS&E is to place it “in the very north end of the [North] quad.”
He said the original building plan featured a full basement to minimize the presence in the residential area, as well as an L-shape to fit around the geothermal wells that provide heating and air conditioning for the CIG and science buildings. He said that since those adaptations are no longer necessary at the newly proposed location, the building is now projected to have 3 floors, no full basement, and be rectangular.
Reniff doesn’t expect this plan to increase the cost, and if approved soon, it would be opened by Spring 2021 after an 18-month construction. The plan will involve the razing of Ward, according to the Faculty Senate.
BW president Bob Helmer, who has presented the initial two plans to the Planning Commission, said he is confident the new plans will move forward.
“BW has worked to be responsive to the questions and concerns of neighbors and city leaders throughout this process,” said Helmer, “and we remain confident that the end result will be a project that benefits Northeast Ohio and makes us all proud.”
The university is trying to be conscious of community concerns, Fletcher said, as well as move forward with a building that is seen as key to recruiting prospective students. BW’s general engineering major was created in 2016 and the University aims to support that major, as well as the existing math and computer science programs, through the MCS&E building.

“I think [the building] has an impact on whether or not prospective students in math, computer science and engineering and others will take a look at us seriously,” said Fletcher. “If they know that they may have an opportunity to study in a first class building for their discipline that’s attractive, that, no doubt, will have an impact on our ability to recruit and retain students.”
Currently, these majors are housed in the MACS building on Tressel Street, which has proven a detriment, he said.
“We’ve had students tell us that they considered Baldwin Wallace until they toured our facilities for math and computer science in an old elementary school,” Fletcher said. “And it looks like an old elementary school.”
The new location would also seem to allow the university to avoid further issue with the Planning Commission.
One of the major issues the Planning Commission had with the initial plan, Fletcher said, was that it would have the MCS&E building about 85 feet from the curb while city code requires buildings to be at least 150 feet from the property line. For the initial plan to proceed, BW would have needed a variance from the city to build closer to the curb.
The new plan would set the building about 300 to 400 feet back, and therefore it would not require a variance. According to Reniff, the new plan would also increase parking and redirect traffic onto Front Street instead of Fifth Avenue, utilizing curb cuts that are already present on Front Street.

THE EXPONENT • Copyright 2022 • FLEX WordPress Theme by SNO • Log in