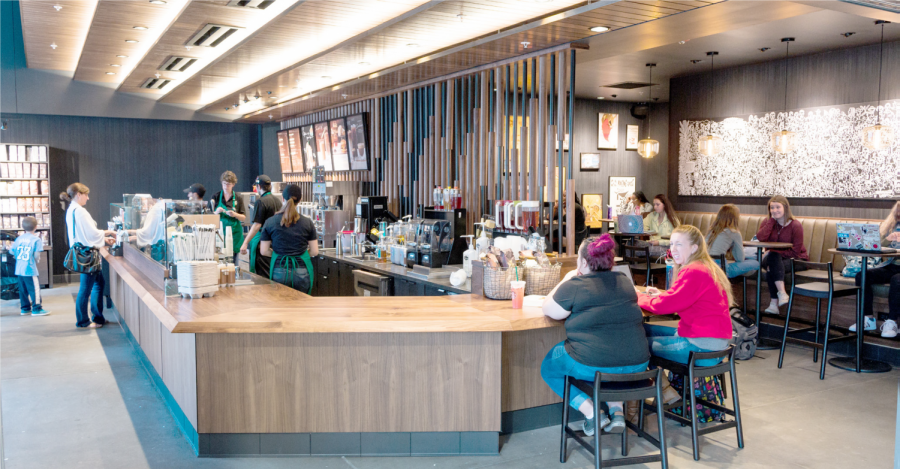 One of the retail spaces on the ground floor is Starbucks, which is run by BW Auxiliary Services. The new building also houses a bank, a pizza place, and a chicken wing restaurant.

The event many in the campus community have been waiting for is here: Baldwin Wallace’s newest residence hall on Front Street has opened, and with it, a treasure trove of opportunity beyond what is normally associated with student housing.

The new dormitory, named the Front Street Residence Hall, includes the top three floors of the complex with suite rooms available to upperclassmen attending BW. What sets the new building apart from other student housing on campus is the ground floor: a space that includes a variety of retail stores featuring food, shopping and more.

The Buzz on Front and Starbucks have already opened their doors in a quieter way, the Grand Opening for the commercial plot as a whole will take place on Sept. 15, during the Homecoming + Community Day activities.

The complex on the whole comprises 64,000 square feet of space on Berea’s Front Street, which means not only will students benefit from these commercial hotspots, but members of the Berea community as well.

One concern that has also come to light following the opening of the residence hall is parking availability.

Shortly after the semester started, the BW Parking Office sent a campus-wide email stressing that the town of Berea would be enforcing the parking regulations in the business district. According to the Berea policy, noted as effective Aug. 13, “student parking” in the areas around the new residence hall is “expressly prohibited” during weekday business hours. According to the policy, “student parking” is defined as “parking for the primary purpose of attending a class(es) at Baldwin Wallace University or parking for residents of any housing facilities owned and/or operated by Baldwin Wallace University.”

According to the BW Campus Access Services, residents of the Front Street dorm are allowed to park one block west from the campus, in a lot next to Giant Eagle. The lot, owned by the Cleveland Metroparks, is the closest parking space available for residents, seeing as parking in the complex parking lot is strictly reserved for the businesses on the ground floor.

According to the Baldwin Wallace website, BW partnered with DiGeronimo Companies to facilitate the retail aspects of the University Market. Centered in the middle of this project is George Schiller, director of campus store operations at BW. For Schiller, this endeavor has already proved a huge success.

As for BW’s role in the construction and ownership of the retail complex, Schiller said that the university owns both The Buzz on Front and the conjoined Starbucks, and in doing so helps to meet the needs of not just students, but members of the community as well.

“Starbucks and the Buzz on Front are university auxiliary services,” he said. “Like all of our auxiliaries, revenue goes to the university. In addition, we employ work-study eligible students at the two shops.”

Schiller also said that in conjunction with this weekend’s Homecoming + Community Day events, the Buzz on Front will have good deals and specials to look forward to.