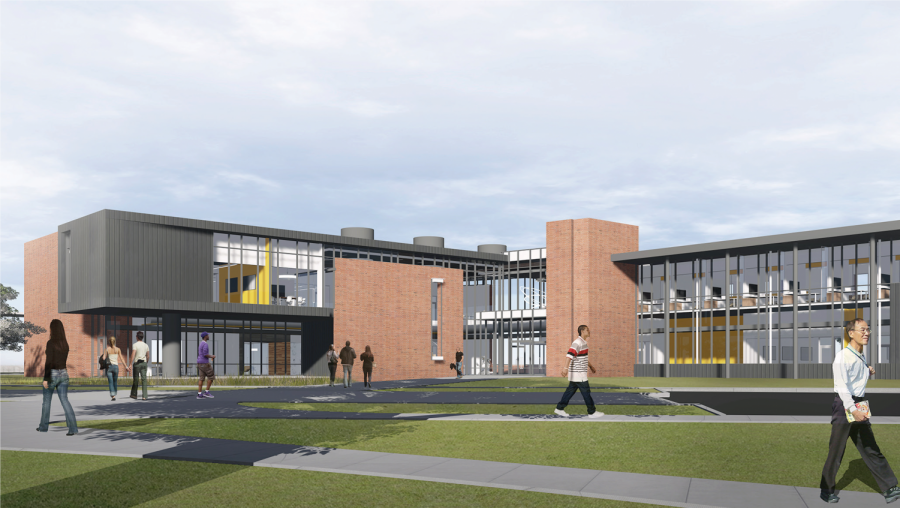 Plans for a new Math, Computer Science, and Engineering building have been halted in response to opposition from the local community.

The university is revising plans and expected to resubmit in a few months, though the delay is expected to impact both the completion date and cost of the new building.

The progress of Baldwin Wallace’s replacement for the existing MACS building for the Math, Computer Science, and Engineering departments was tabled at the Berea Planning Commission meeting on Aug. 16, where the university was seeking approval of several waivers.

The motion for a new building on the corner of Front Street and Fifth Street was met with concerns from residents, pushback from the planning commission, and opposition from Mayor of Berea, Cyril Kleem. Public concerns included parking, traffic, and appearance of the building.

“The building is not in the best interests of Berea and the surrounding neighborhood,” said Kleem during the Aug. 16 meeting, according to a report in cleveland.com. “An alternative location could provide a better balance in which the impact would be more proportionally distributed.”

Baldwin Wallace President Bob Helmer said there was “no other alternative location” for the building, according to cleveland.com, and asked to table the motion in order to reevaluate plans for the building with community concerns in mind.

Baldwin Wallace Senior Vice President Dick Fletcher said it is likely that BW will try to resubmit the motion to the commission this November. Despite the setback, he said the university remains optimistic about the building.

“I wouldn’t say the city isn’t behind it,” said Fletcher. “There may be a couple of people in the city who aren’t behind [the new building], but I am hopeful that the Planning Commission will see the wisdom of the project and how it benefits Baldwin Wallace and our students. And how … ultimately that will benefit the broader community as well.”

As of March 2018, the donor-funded MCS+E project was expected to cost $20 million. Now, Fletcher said that the cost may exceed that initial estimate, although the exact amount is undetermined at this time.

He also said that the time frame for this project has been set back about six months, moving the expected completion date from January to August of 2020.

Fletcher said the plan to turn the west end of the current MACS building into green space is still expected to happen and there may also be more parking added to the east side of the building. First, however, BW must get the new MCS+E building approved by the Planning Commission to move forward.

To build the proposed building, BW needs to get a conditional use permit, which would allow the MCS+E building to be exempt from certain building regulations. In order to proceed with this project, the Planning Commission must vote on and approve several variances to the Berea building code.

The parking and traffic impact of MCS+E was also discussed at the Planning Commission meeting. The MCS+E building, in addition to the new Berea-Midpark High School, have sparked some concern about increased traffic in the Fifth Street neighborhood behind those buildings.

“Most of the students in those programs are residents who already have cars on campus or park somewhere and most of those resident students walk to class,” said Fletcher. “Those who think that we have to address the parking issue think we need to add a lot more parking than what we actually think we need to address the number of students who are in those majors. So I respect their opinion, and we’ll just have to take a look at it to see what we can come up with. I think we’re going to have to add some parking spaces. How many, we don’t know yet.”

The current MACS building originally opened as the Loomis Elementary School in 1951. Dr. Jodi Tims, professor and chair of Computer Science, said that this building is limited in what it can provide in lab space, network connectivity, and engineering lab resources. The General Engineering program was introduced two years ago and Tims said the expansion of that program is “absolutely dependent” upon the new MCS+E building.

“I just don’t think we have any kind of appropriate lab space on campus for engineering and finding that in existing buildings would be really really hard,” she said. “Not to mention, it’s its own expense then to retrofit buildings that weren’t built to be engineering labs into engineering labs.”

The location for the proposed MCS+E was identified when Baldwin Wallace did a campus master plan in 2000, but the purpose of a potential building on that site was undetermined at the time. Since then, BW’s programs in computer science and engineering fields have grown and developed significantly. In addition, the location of MCS+E could further integrate those programs into to the science community on North Campus, said Fletcher.

“I personally think that’s where it needs to be to take advantage of the synergies between math, computer science, engineering, the sciences, biology, chemistry, the CIG,” said Fletcher. “It all fits right there together and just makes the most sense. We’re proud of what they’re doing, and they need to be able to do those things in a first class facility.”

Despite the setback with the city, Fletcher said the university remains committed to effectively partnering with the local government and citizens.