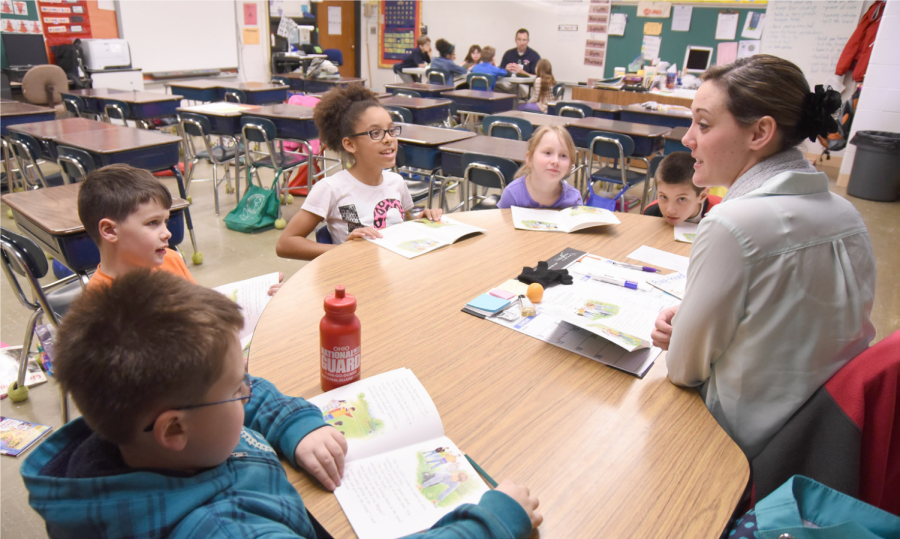 A new student teaching model thrives at Baldwin Wallace allowing more opportunities for students of the School of Education to get hands-on experience.

When first introduced in the 2014/2015 academic year, the co-teaching model underwent a one-year pilot period where it was studied, and small adjustments were made to make it a good fit for Baldwin Wallace and the participating school districts. Early results from a report in 2015 were very promising, suggesting that the model may have a bright future at BW. The success of the pilot led the School of Education to continue with the program.

Now, approximately three years after its pilot period and implementation, Rochelle Berndt, assistant professor and head of the co-teaching program, says that the program has lived up to the early positive reports.

“Like anything, there’s always little things you’re tweaking and changing and always trying to make something better, but overall, we’ve had a lot of success with all sides,” said Berndt.

In its first year, Baldwin Wallace worked with two elementary schools with seven student teachers in the Berea City School district. The second year, the program expanded to include Falls-Lennox Primary School in Olmstead Falls.

Currently, there are 12 early childhood education students assigned to these two districts. With everything running smoothly in the current districts BW is working with, there are plans to grow the program even more in the near future.

“We are hoping to basically double what we have as early as next year. We have 12 early childhood candidates right now but we could have as many as possibly in the low 20s next year,” said Berndt. “If we do it in the fall, that would really allow everyone in early childhood education the opportunity to be a part of this program.”

Michael Smith, a new associate dean of the School of Education, is part of this effort to expand the program, and has been meeting with faculty to discuss the logistics of next year’s planned expansion. He joined the university last year and has almost a decade of experience with the co-teaching model.

“Before coming to BW this past July, I served as the Dean of Education at Lourdes University. We adopted the co-teaching method about eight years ago,” said Smith. “It has been a great success for all involved.”

Expanding the use of this new student teaching model is a priority for the School of Education because so far, it has been a very beneficial experience for those who are involved with the program. Some of the most apparent benefits the student teachers noticed were that they “had a stronger sense of readiness to meet all students’ needs,” said Berndt, and that “they had increased their professional collaboration skills.”

Another major benefit to using this model is the stronger relationship it builds between student teachers and their host teachers. From the very beginning, the program is dedicated to making sure the students and teachers are compatible with one another, and that they will be able to work well in a classroom environment.

“We actually have an activity that we call ‘speed dating’ where everybody sits down, and for about five minutes, shares background information, teaching philosophies, things like that, and then they switch. At the end they get to preference with whom they’d like to work,” said Berndt. “That’s very different than in a traditional model where you would just get a placement and you were just assigned to someone and you have never met that individual.”

In a traditional setting, student teachers would plan their individual lessons and then show them to be approved by the teacher. The student would gain experience teaching, but “there wasn’t a lot of planning going on together,” said Berndt.  The process of teachers collaborating on the creation of lesson plans is called co-planning, and this has been a major factor in creating a more collaborative environment in the classroom.
The increased collaboration introduced by the new model has even extended past the student teacher relationship, and teachers at the cooperating schools felt that they were more open to trying new things in the classroom.

“A lot of the cooperating teachers also felt that they were more collaborative even with their own colleagues. There were some teachers that were teaching in a self-contained, early education classroom and pretty much were with their own students all day,” said Berndt. “They felt that this opened it up to other teachers trying new strategies they’ve learned from co-teaching.”