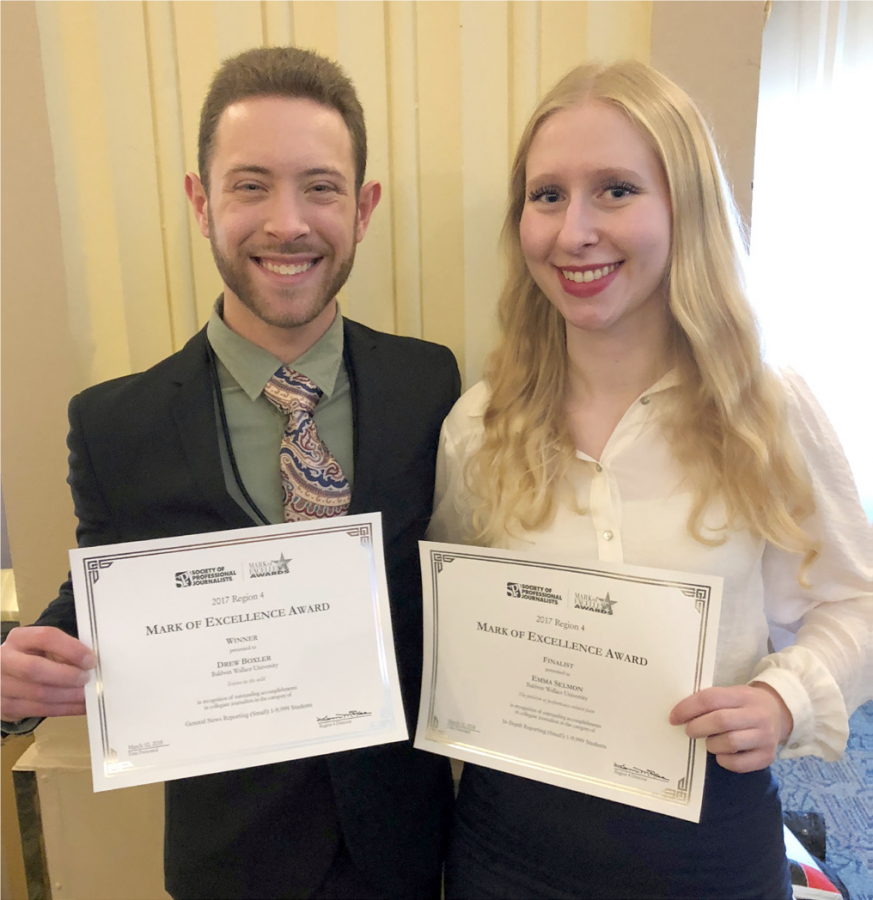 Two journalists for Baldwin Wallace’s student newspaper, The Exponent, were awarded by the Society of Professional Journalists (SPJ) this March for their work in 2017.

The SPJ is a national journalism organization that has advocated for the “free practice of journalism” since its founding in 1909.

Drew Boxler, senior biology and English double major and executive editor for The Exponent, and Emma Selmon, junior clarinet performance major, English minor, and senior editor for The Exponent, were given awards by the SPJ in the Region 4 small school division—comprised of schools with less than 10,000 students in Michigan, Ohio, West Virginia, and Western Pennsylvania.

Boxler was presented first place in the category General News Writing for his article, “Science in the wild,” while Selmon’s article, “The problem of performance-related pain,” was named as a finalist for In-Depth Reporting.

“I was surprised to hear that my performance injury story had been nominated for an award,” said Selmon. “I think that story outlined an important issue to a lot of students in the Conservatory, and I was glad to see that I was able to write about it well enough for it to be recognized by the [SPJ].”

These two awards are the first distinctions given to The Exponent under the new direction of faculty member Brandon Szuminsky, assistant professor of journalism, who joined BW in the fall of 2017.

“One of the most interesting aspects of my time at The Exponent,” said Boxler, who joined the publication the fall of 2014, “has been the experience of transition and reinvention. During my freshman year, we were still printing on paper sizes like we have today, but began transitioning to a more magazine-style layout during the end of my sophomore year and into my junior year. Luckily, with the introduction of Dr. Szuminsky, we were able to effortlessly transition back to our old print and make a complete turnaround with regard to our style and content.”

Both Selmon and Boxler believe their awards attest to the progress The Exponent has made in the last year, and are hopeful that improvements the newspaper has made thus far will continue in the future.

It is Boxler’s wish that such recognition will inspire other BW students to join The Exponent and show interest in journalism.