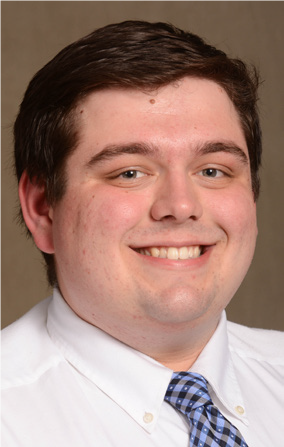 Both excited and anxious about the responsibilities of their new roles, the pair said they look forward to serving the student body in any way that they can.

“We are here to listen to the students,” said Henthorn. “Our office is always open.”

The pair also acknowledges that the job comes with certain obstacles that are bound to test them throughout the next year. Recent events and revelations on the BW campus have created an air of distrust between some students and the administration, they said, including the early semester campus safety forum.

One of Henthorn and Crays’s primary goals while running was the idea of bringing the entire BW community together and making ways of “meaningful collaboration.”

“We want to be able to restore the bond of trust between the administration and the students,” said Henthorn.

Crays added, “we also want to let the students know that they have a voice and it does matter, even if they feel like it doesn’t.”

Crays, a public health major, also mentioned that one of her main goals for Baldwin Wallace over the coming year is to “focus on student wellness,” adding “focus on mental health and working with counseling services, to increase those resources so that students and faculty know how to access them.”

As far as their qualifications are concerned, both Crays and Henthorn are active members of multiple organizations and activities at BW, including fraternity and sorority life, and are considered respected individuals by faculty and staff.

Dr. Thomas Sutton, a professor of political science at BW and director of the Community Research Institute had positive remarks regarding both Henthorn and Crays.

“[Henthorn] is eager to pitch in and help, always with a smile,” he said. “He is hardworking, diligent, and very
bright.”

He also clarified that although his relationship with Crays is not as developed, he has “heard positive comments about her work and demeanor from colleagues,” and he personally has gotten “positive impressions” from their interactions.

Student Activities Director, Jaime Yager, who has known the pair since their freshman year reiterated the statement.

“Through their work and various leadership roles in Student Senate,” said Yager, “I have found both Andy and Ally to be dedicated, hardworking, committed, inclusive, service-minded, open-minded, kind and genuine.”