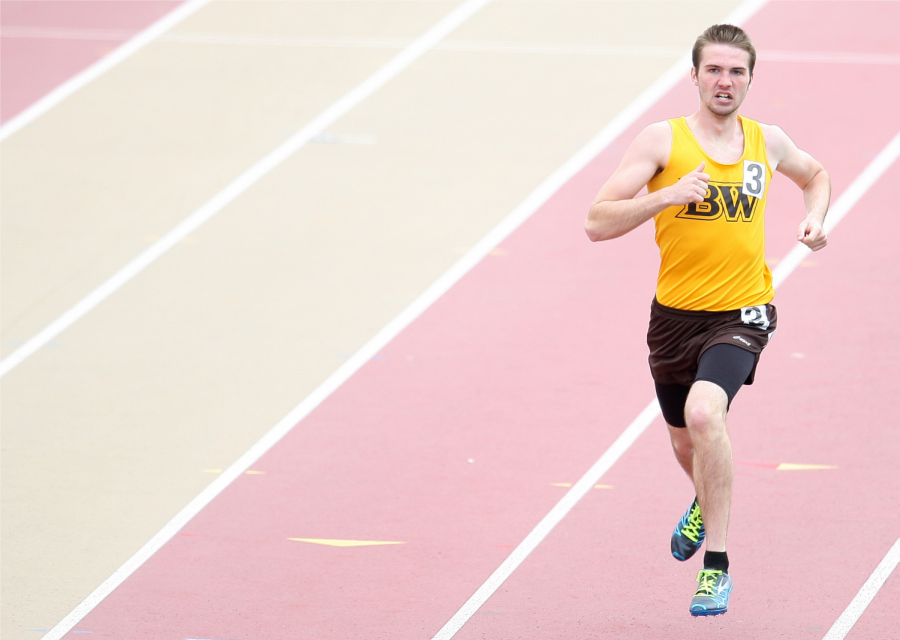 Junior Holden Daly, who was diagnosed with cerebral palsy at age 5, will compete in the Youth World Games this summer.

Holden Daly, a junior Marketing major at BW, has been invited to represent the United States in the International Wheelchair and Amputee Sports Federation (IWAS) Youth World Games.

Daly, along with another 29 U.S. participants, will represent the country in track & field and swimming. He and his teammates will be competing in Athlone, Ireland, from June 29 – through July 6 this coming summer.

Daly, who at age 5 was diagnosed with cerebral palsy, said he was surprised to get the invitation. He has had a connection with Team USA and the International Paralympic Committee (IPC), but Adaptive Sports—sponsored, but not funded by IPC—came to him about the idea of a competition for athletes under age 23.

The Youth World Games will feature athletes from 80 nations, he said, and a variety of backgrounds.

“For people who have cerebral palsy, dwarfism, autism, and wheelchairs, that’s what the races are about,” he said.

Daly said he is excited to represent more than himself at the games.

“I have pride in my city, Vermilion, and for the United States,” he said. “I’m doing it for people who have been there for me. I’m not trying to prove anything to people who were against me or didn’t believe in me. I want to inspire people, but I want people to know that I’m just like you. Don’t pity me. Feel inspired. I give credit to Vermilion; it is my backbone. The town’s been with me through life’s problems and even set me up to come to Baldwin Wallace.”

For the Youth World Games, Daly qualified to compete in the 800m and the 1500m run. He said he has been training for four years and is currently under rigorous training.

“I feel confident with the amount of work I’ve been putting in,” he said. “I have two speed days totaling at 10 miles, that’s everything included: the cool downs, warm ups, that stuff. Then mid-distance at 8 miles and short days at 5. Then I have long runs on Sundays at 12 miles. That all totals to about 60 miles.”

Daly said his cerebral palsy, which hinders the motor skills, coordination, control, and balance in the entire left side of his body, does not have a negative effect on his training.

“I can do everything,” he said. “My flexibility has never been the greatest, I’m like a fifty-year-old when it comes to that. That’s okay for me, it’s not the biggest thing in the world. That’s the only stuff that puts me back.”

The games will feature a high level of competition, Daly said, which may surprise people.

“I don’t think a lot of people knew about this,” he said. “The competition, I want people to know, is very competitive. We had three blind runners at the last Paralympics beat the actual Olympic time.”

Daly hopes he can be a part of spreading the word and creating awareness for IWAS and IPC, as well as the athletes who compete.

“I think the United States does a poor job of coverage. England runs [the games] 24/7. We don’t. That’s unfortunate,” he said. “This could be a $50 million industry for advertising.”

The issue, however, goes beyond simple popularity, he said, as the average Paralympian makes only $16,000 and could benefit from a growth of the games.

“I’m very fortunate. I look like you and I can work a normal job,” he said. “A lot of these people can’t. Why not give some more money through advertising? There needs to be a better televised platform.”

Greater awareness of the games could also help upend expectations of what these athletes are capable of, he said.

“I think many people in our nation buy into stereotypes,” he said. “I’d love to see a Paralympian go against a normal athlete. They can see how athletic it is and how competitive it can be. We have to break down these misconceptions.”

In addition to his hometown, Daly credits the actor Michael J. Fox, who was diagnosed later in life, for inspiring him.

“He’s one of the most successful nonprofits fighting disease,” he said. “A quote from him in Back to the Future I live by is, ‘If you put your mind to it, you can accomplish anything’ – very cheesy, but it’s my mantra.”

The value of hard work is something Daly has internalized, he said.

“Don’t confuse hard work with talent,” he said. “A lot of people mistake hard workers as talented. It’s about how you apply yourself, that’s what makes you successful. It’s not just talent. I think that misconception is because of television. Everyone sees the after. They don’t see the behind the scenes.”

Editor’s note: Daly is running a GoFundMe campaign to earn $3,500 to finance his trip to Ireland, titled “My Paralympic Dreams to Ireland”.