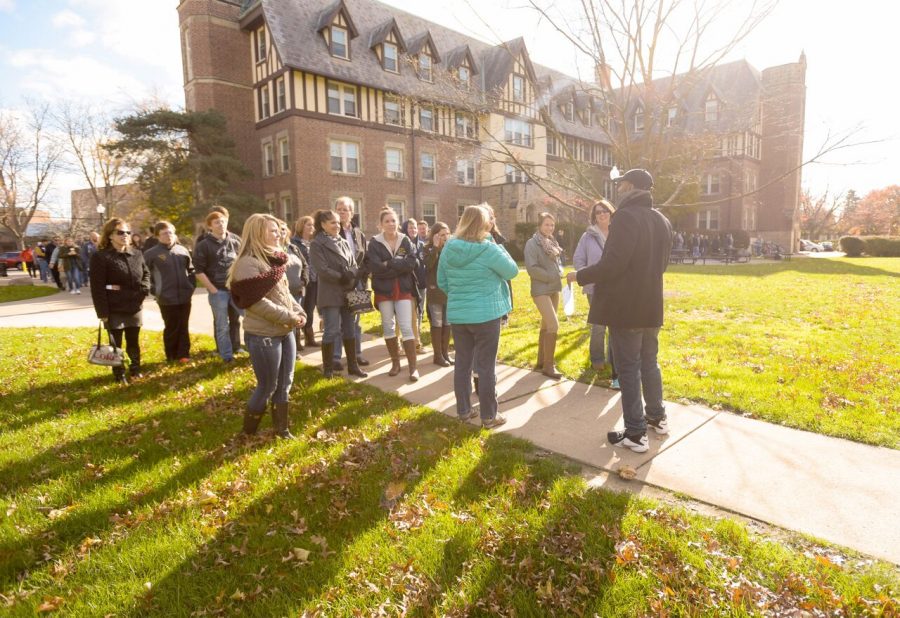 Events like Fall Preview Day bring large numbers of prospective students and their families to campus. The Office of Admissions, however, is seeking to improve the ways the university recruits new students.

While students have been busy attending classes and other obligations, and staff have been maintaining the operations of Baldwin Wallace’s campus, the Admissions Office has been hard at work developing and instituting a revitalized recruitment and retention effort for the incoming 2018 class.

Following an incoming 2017 class that was below expectations, the Admissions Office has been identifying ways to improve the next class, said Dr. Scott Shulz, vice president for enrollment management, who has led the office since the spring 2015.

While the class will not officially coalesce for many months, those efforts are already bearing fruit, as BW is in a positive state this year in terms of applicant statuses, Schulz said. The Admissions Office has calculated several hundred more applicants this year when compared with this same time last year, Shulz said. Of those several hundred additional applicants, Schulz said that around 28% had solidified their spot in the class with a financial deposit.

According to Shulz, the admissions office was able to analyze new, in-depth data for the 2017 recruitment cycle, and specifically pinpoint areas for improvement, while brainstorm potential interventions to increase attraction and retention.

Many changes are not actually focused on the recruitment process, but rather on financial aid.

One of these new modifications consisted of the finalization of financial packages earlier in the year. Previously, Schulz said, financial packages were completed by mid-January; however, for the current recruitment cycle, financial packages have been finalized by December, allowing families to prepare, consider, and understand their financial options over a longer period of time, which the office hopes will increase the likelihood they attend BW.

In addition, to further increase the ease of visualizing potential financial aid, a new tier of incoming academic scholarship was added to the preexisting President’s, Trustees, and Deans Scholarships.

This new tier, the Fellows Scholarship, provides an additional financial aid opportunity to a sector of prospective students excluded from the previous tier system, Shulz said.

BW is also altering some of the ways it addresses applicants’ test scores, Shulz said. The Admissions Office opened up the possibility for ACT Super-Scoring, which was previously only allowed for SAT scores, he said.

Now, students are able to combine scores from particular segments of the ACT from any of the times that they took the test. This allows students to isolate their greatest performance in each respective area, Shulz said, and combine them for a super composite score that they can then put on their BW applications. 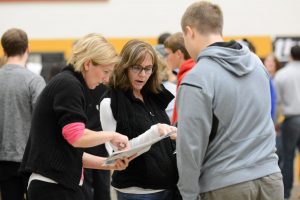 With the change, Shulz said that there is a greater likelihood to engage with a sector of students lost in previous recruitment cycles.

Additionally, the ACT Super Score increases the potential for Ohio students – an increasingly difficult recruitment market, according to Shulz – to apply and subsequently enroll. Ohio, along with other states in the Midwest, is currently experiencing a major demographic shift, he said, which is decreasing the potential applicant pool for colleges to recruit from.

“The midwest is by far the region that is losing the population the most,” Shulz said, “followed by the Northeast in second, and… growth in the South and Midwest.”

Additionally, Ohio is home to over 50 private colleges and universities, all vying for the same in-state students, he said.

Shulz said through the data analysis over the summer of 2017, the Admissions Office was able to pinpoint areas in the state where interest in BW was waning, and target more of their time investments into schools and cities in those areas.

In addition to Cleveland and Columbus, the Admissions Office increased concentrated efforts in the cities of Cincinnati, Norwalk, and Youngstown, he said.

One of the newer innovations added to BW’s recruitment efforts was the advent of a texting system. While Shulz said this has been in use at other institutions, BW’s admissions office strategized an intentional text-based system that would send infrequent reminders to students regarding application completion status and offer personal assistance with financial aid and FAFSA documentation.

Another innovation for BW’s recruitment strategy was the opportunity for students to have a personal phone conversation with faculty members. Shulz said that students were offered to set up a call with one of the professors of the departments in which they were interested in enrolling. Over the course of the recruitment cycle throughout 2017 and early 2018, Schulz said that several students took the offer.

“One of BW’s greatest assets is its faculty,” Shulz said, “and we really wanted to be able to put that front and center for students. You’re only as good as you’re going to put forward: a motivated, sincere recruitment style that can project out to the students and maintain a commitment to those areas.”

While the arrival of Spring Break means the conclusion of the Spring semester may be right around the corner for most of the campus community, the recruitment process has only just begun for the Admissions Office.

Within the next few weeks, BW alumni will begin making their calls to the parents of admitted students as part of the office’s recruitment efforts, Schulz said.

“It really energizes [the alumni] because it’s not about putting money into the University, but it’s about getting involved in a way that truly that builds the community for the future,” Schulz said.

Further down the road, the admissions office will oversee coordinated overnight stays with contemporary students as well as parental receptions.