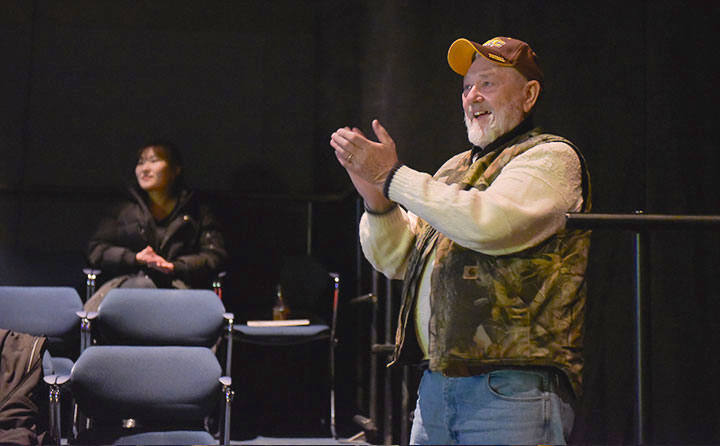 Jack Winget has had one of the longest and most successful careers at Baldwin Wallace. He is a theater professor who has directed roughly one hundred plays during his career of forty-nine years. He is from Cridersville, Ohio, and served in the Navy for four years, then graduated from Bowling Green State University where he found his passion for theater. He auditioned for a show for the first time and ended up with the male lead. During his time at Bowling Green, he participated in over sixty shows and completed his Masters degree. Afterwards, he had an opportunity to come work for Baldwin Wallace as a theater and communications professor. He chose to work here because he felt a connection to the student body and faculty.

One of Winget’s greatest achievements was a play he wrote called A Nightmare of Crime. He researched the subject of the Holocaust for three years, gathered money from different organizations, and produced it at Baldwin Wallace. “I appreciate that the college gives me the chance to be creative by letting me choose the shows I direct and for allowing me to think outside the box,” Winget said. He felt the show was an excellent production and said the audience responded well to his play. The show won the Bechberger Award for working with students.

The thing Winget likes best about BW is working with students and directing shows. One of his favorite classes to teach is Directing. “I love to teach it. I think if someone is in theater, an actor can so learn much about their craft by taking the class”. He said a director takes all the disciplines from lighting to acting to put on a successful production. A director must use his or her creativity to showcase a variety of talent. He also loves to teach Intro to Theater because of the variety of students. In that class, students who love theater as well as ones who are new to it are integrated. He believes it is a good way for students to have exposure to theater and find new talents and interests.

Winget recently directed The Diviners, which is his last play here at Baldwin Wallace. “I chose this play because we all have good intentions, but sometimes they clash with the intentions of someone else,” he said. “It is a show about values and the birth and death of innocence.” He loves the fact the play has an equal number of male and female roles, and felt it gave an opportunity to both genders. He also said the show appeals to the mind, intellect, and emotions. Overall, he felt the production was marvelous and enjoyed directing it.

With a long career and history at Baldwin Wallace, Winget has influenced many students throughout his time here. He loves his job, and appreciates how he is able to work with students and faculty here.