The Image of a Hero 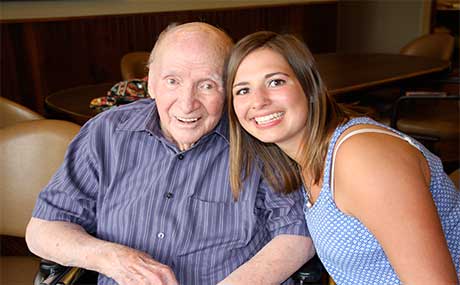 It is sometimes said that art is about expressing one’s pain. To paraphrase Earnest Hemmingway, what you must do is sit down and bleed.

Given this fundamental principle it is no coincidence that the most horrific of situations led to the creation of countless artists. One such artist that used his work as a means of survival is Ben Steele, a survivor of the nightmarish Bataan Death March and Japanese Prisoner of War camps.

Steele turned to art as a means to cope with the situation and will be featured in the upcoming Netflix documentary “Survival Through Art.”

Steele’s story caught the imagination of one Baldwin Wallace Student, Lexi Winkelfoos, who was impressed and humbled by Steele’s story. Since their first contact a strong bond of friendship has emerged over several years, a friendship that still includes weekly communications and occasional visits to Steele’s Montana home.

Winkelfoos will be presenting her and Steele’s story on March 24th at 5 p.m. in Strosacker Hall’s Sandstone 3 courtesy of the Phi Alpha Theta national history honor society.

“My life has never been the same since meeting my hero,” Winkelfoos said, “I appreciate every single thing I have and look at every situation differently.”