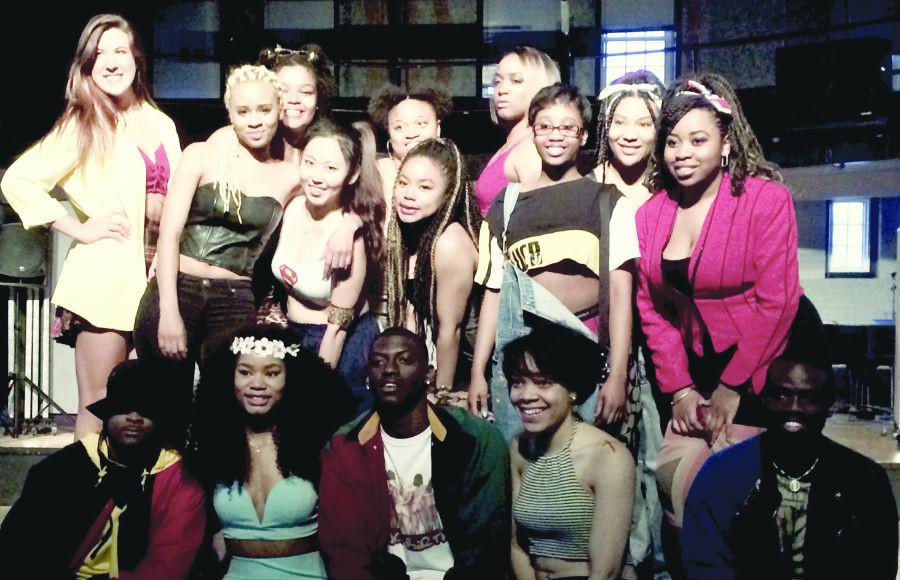 Participants of the POCU Fashion Show show off their fashion ensembles.

The Annual POCU Fashion Show held by the campus organization “People of Color United,” was held in the Student Activities Center on Saturday, April 18.
The fashion show is the final activity of the year held by POCU. Junior Martell Prayear and senior Miranda Jackson were the show’s hosts and announcers.
The fashion show is a competition where various designers, or teams of designers, are required to create outfits that adhere to a general theme, but also incorporate the designer’s unique, personal concepts.
This year, the general theme for the fashion show was: Thrift Shop. Each designer, or group of designers, was required to utilize clothes purchased from the local Goodwill and maintain a $50 budget.
Preparations for the event, Jackson said, were very short.
“I was really surprised how well it turned out, because we started practicing for the show at four o’clock that day,” Jackson said. “They typically start practicing way a head of time.”
Despite the delayed preparation, the fashion show was an overall success.
The first designer to present at the fashion show was Victoria Webster. Webster’s fashion line was inspired by professional work attire.
“I think it can be hard transitioning college wear into professional wear, on a budget,” Webster said of her outfits. Webster was able to find three models to wear the clothes, which she said was a combination of the model’s personal items, as well as those purchased through Goodwill.
The second fashion line presented at the fashion show was designed by Iyana Lynch. For her personal theme, Lynch designed outfits that were inspired by the different seasons.
The third designer to present that evening was Alyssa Nieset. Inspired by 90’s menswear, Nieset designed a line of androgynous outfits.
The final clothing line presented was a team effort from: Jeanita Blue and Angel Powell. Their theme was considered “90’s Reloaded,” and featured various throwbacks to 1990’s pop culture such as TLC and The Spice Girls.
Blue said that most of the outfits in their fashion line were inspired by “eco-friendly fashion,” and were intended to decrease hesitation toward shopping at thrift stores.
While the judges finalized the scores for each designer or team, the Urban Dance Association entertained the crowd with a quick performance.
The judge’s scores resulted in a tie between Jeanita Blue & Angel Powell, and Iyana Lynch. Despite the general tie, Blue and Powell were awarded first place, while Lynch was granted second place.
There was an off-campus reception held in Cleveland after the event.