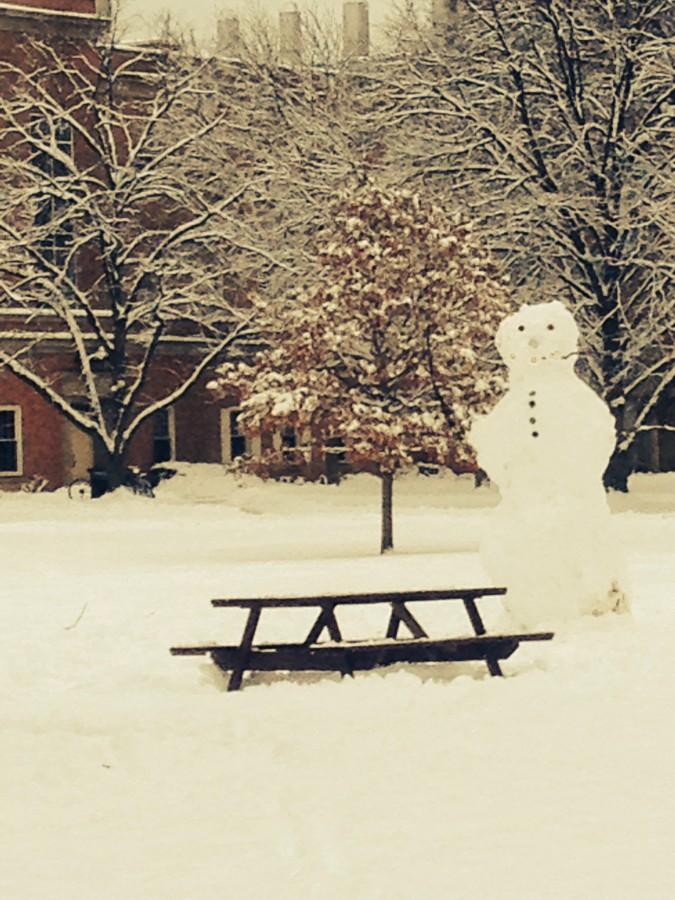 The rise of social media has granted interaction between individuals who would otherwise not be given the opportunity to come in contact with each other. As a result, unfiltered commentary about people or events events can freely flow between individuals, in a context that has made the lines between professional conduct and inappropriate commentary hazy at best.
The Twitter feeds on Baldwin Wallace’s campus are no exception; students have taken to the social media site to voice concerns ignited by this year’s brutal winter weather in regards to the continuation of class activity. The tweets fall anywhere on the spectrum from positive to negative interaction, but almost all of them have been directed straight to President Robert Helmer’s account.
In response to this online activity, President Helmer has emphasized the importance of classes and spoken out about the considerations involved with the process of class cancelation and delays. “We are preparing students for successful careers, and not going to work because it is snowing or is cold is usually not an option at most companies,” Helmer said.
“It is one thing if we have to allow more time to get to campus and classes, but it’s another thing if authorities are telling people to stay off the roads,” Helmer continued.
However, President Helmer is not the only individual involved in the final decision. Officials from Academic Affairs, Student Affairs, Safety and Security, and Buildings and Grounds, and the Board of Directors collectively determine to delay classes, or cancel them altogether.
At this point in the process, typically, students take to social media to voice their dissatisfaction when decisions do not align with their desires. However, this may not always be the most effective strategy, according to former Student Body President, Kevin Warman: “If we want to actually have meaningful conversation,” he said, adding that, “we should be careful about our comments online.”
“Words matter…on social media, because that is the only thing you are communicating,” Warman continued.
Warman emphasized that what students must remember when directly contacting officials of any kind is that the lack of body language and vocal inflections removes an entire aspect of information about a message’s original intention.
“President Helmer has a good sense of humor and he enjoys joking around, but we should be careful about what we say on social media being perceived as rude—even if it wasn’t meant that way,” Warman said.
Members of the student body also have mixed feelings about the tweets being exchanged with President Helmer. “I’ve seen some people ask some legitimate questions, but others are kind of pointless or they aren’t respectful,” Antonia Searight, a freshman chemistry major said.
Naturally, sites like Twitter are media of self-expression and free speech, but—as Warman pointed out—students should ask themselves a few questions before posting commentary online, including: “Is it warranted?” and “Should you really be saying it on social media?”
When used properly, social media can be used in fairly productive, positive manners. For example, President Helmer utilizes Twitter exclusively to promote achievements of Baldwin Wallace students and alumni as well as campus events. President Helmer also encourages students to contact him on Twitter at @bwpres to promote students successes.
“As always, I hope that we are all respectful of one another in the way we communicate,  Helmer said.