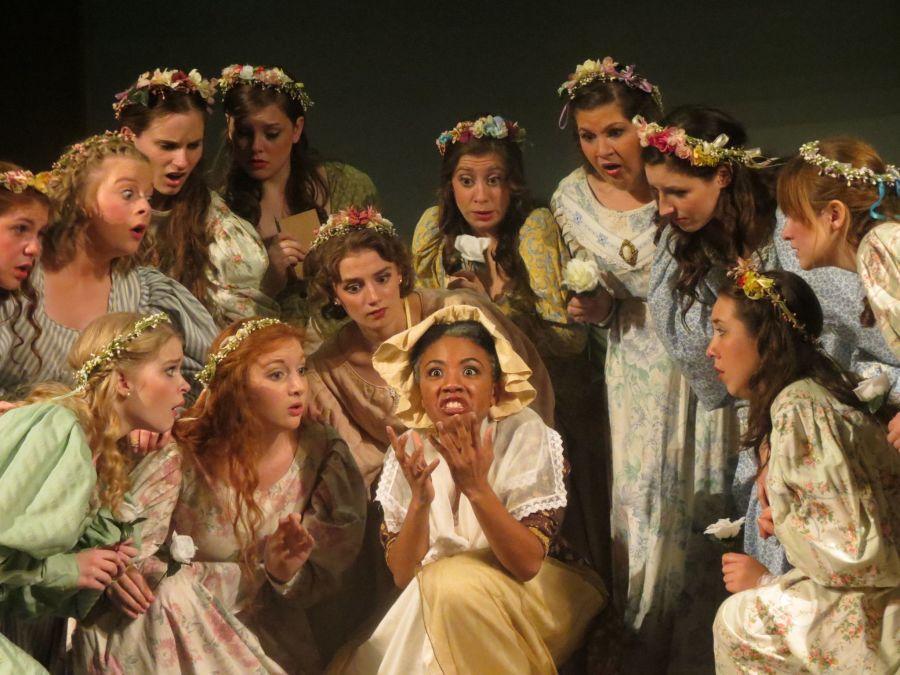 The Women’s Chorus of the Maybud cast of Ruddigore surround Erica Moffatte, playing the role of Dame Hannah.

The Baldwin Wallace Conservatory’s fall operetta, “Ruddigore or The Witch’s Curse,” ran Nov. 7 through the 9. The debut of this year’s opera season was directed and conceived by Conservatory Director of Opera, Benjamin Wayne Smith, and conducted by senior music theory major, Jordan Abu-Elhawa.
There were two casts that performed the main roles on alternating nights with recurring members in the supporting chorus for both casts. The Maybud Cast—performing the the show I attended—were seen Saturday and Sunday afternoon while the Rose Cast was seen Friday and Saturday night.
This production was everything opera should be—dramatic, well sung, funny, engaging, and in English (I like understanding what is going on). I absolutely loved the comedic aspect of the opera. The performers did an excellent job of being dramatic to ludicrous proportions.
The nonsensical parts of the operetta, however did not distract from the obvious talent of the performers. Shelby Holt-Komar, a sophomore vocal performance major, played the role of Rose Maybud, a flighty maiden gold digger.
“Ruddigore” showcased Holt-Komar’s excellent voice, as her light soprano sound nimbly maneuvered through the acrobatic scales and rapid fire lyrics that are characteristic of Gilbert and Sullivan.
Christopher Rojas, a junior vocal performance major with a baritone sound, managed the challenging role of Robin Oakapple, one of Rose Maybud’s love interests and a baronet in disguise, very well. His voice was very well controlled and complemented his fellow performers.
Sophomore Tyler Levicki played Richard Dauntless, foster-brother to Robin, love interest to Rose, and common sailor on leave. Levicki’s fresh-faced, boyish look and measured voice made him a crowd pleaser.
Matthew Case, sophomore vocal performance major, portrayed the role of the lovably evil Sir Richard Despard. Case made his entrances with the presence of an eccentric Bond villain and had a rich tenor tone to his voice.
Sophomore Robin Senser played Mad Margaret with an excellent maniacal laugh to match. Senser’s Mad Margaret added a lot of spice to the otherwise sweet and naïve cast of characters.
I was especially impressed with the women’s chorus, singing with such energy and each portraying hilariously naïve characters. The audience could not help but laugh every time they were on stage, with comedic moments that would fit a Monty Python skit.
The only accompaniment for the performance was one Steinway grand piano—played by the very-talented Peter Douglas. It was a perfect complement to the vocalists’ voices.
Student director, Jordan Abu-Elhawa, also did an outstanding job, transitioning from conducting the pianist to conducting the performance with fluidity and ease.
Overall, the vocals were excellent and the acting well directed. The accompaniment, costumes and performance space all reflected the message of the operetta and complemented the performance nicely.