A Chorus Line Proves to be ‘Singular Sensation’ at BW 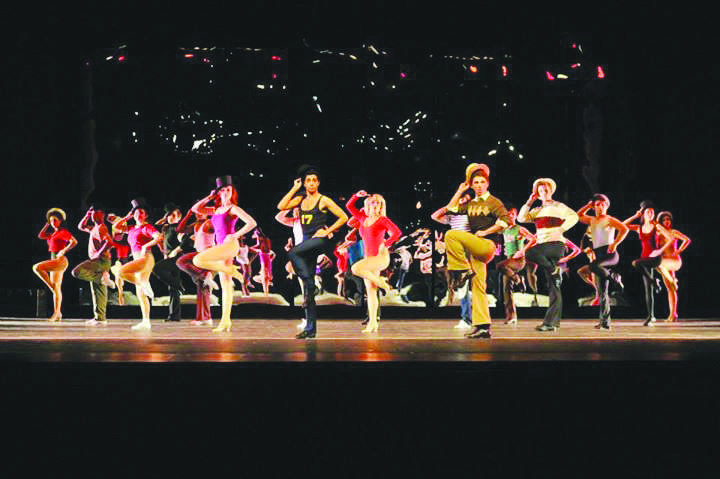 The full “Cassie” cast of A Chorus Line performs the opening number “Opening/I Hope I Get It”.

Baldwin Wallace University’s Department of Theatre and Dance and the Conservatory of Music recently produced A Chorus Line, which ran from November 13th to the 23rd.
This popular musical was directed by Victoria Bussert, with music direction by David Pepin. Performances were held in the John Patrick Theatre, and it was double cast between the Zach cast and Cassie cast. I saw a production featuring the Cassie cast.
This particular production of A Chorus Line replicated the original Broadway cast, from costumes to choreography.
Gregory Daniels re-staged Michael Bennett’s original choreography, and Charlotte Yetman coordinated the costumes. The scene design concept and lighting design was done by Jeff Herrman and USA Local 829.
For those unfamiliar, A Chorus Line follows the paths of 17 dancers auditioning for a Broadway chorus line for its director Zach. Characters become relatable and intriguing through monologue, song, and, of course, dance.
Right off the bat, the audience is driven into the audition process. With about forty people on stage, “Opening/I Hope I Get It” is the biggest number of the show. It realistically showcases the good, the bad, and the ugly every audition has.
As the show progresses, so does the character development. Mike, played by Kelly Autry, starts off the showcasing of the dancers with a rousing “I Can Do That!.”
Victoria Pippo’s snarky seductiveness was a nice lead in to “At The Ballet”, with the additions of Meghan Cordier as Bebe and Lucy Anders as Maggie.
What Kristine (played by Caroline Murrah) lacks in pitch she makes up in dancing and personality. She and her husband Al (played by John Kramer) played the adorable married couple down to a T.
Gabe Brown brought the right combination of authority and sympathy to the role of Zach. Mackenzie Wright played Diana Morales, the actress who’s determined to prove that she is something with spunk .
Tre Frazier brought loads of energy as Richie, the basketball star with big dreams. Annalise Griswold was able to flaunt it as the hilarious plastic surgery obsessed Val.
Notable actors who did an exceptional job staying in character were Erin Moylan as Judy, a southern belle from Texas, and Livvy Marcus as Connie, the Asian who gets tense when she taps.
There were two notable cast members who struck not only my fancy, but managed to grab the attention of a Kennedy Center representative. Genna-Paige Kanago and Michael Canada were both nominated to participate in the 2015 Kennedy Center American College Theatre Festival (KCACTF) Region 2 Irene Ryan Acting Scholarship auditions.
Genna-Paige Kanago played Cassie, Zach’s old love interest with a heart of gold. It was almost impossible to tear your eyes away as she commanded the stage during “The Music and The Mirror”.
Michael Canada played the quiet and sweet Paul. His monologue showed an incredible grasp of character and truth, allowing the audience to feel his struggle along with him.
The entire Cassie cast did a marvelous job creating characters and telling memorable stories on stage. If you missed this production, you missed a night filled with high energy, emotion, and truth.