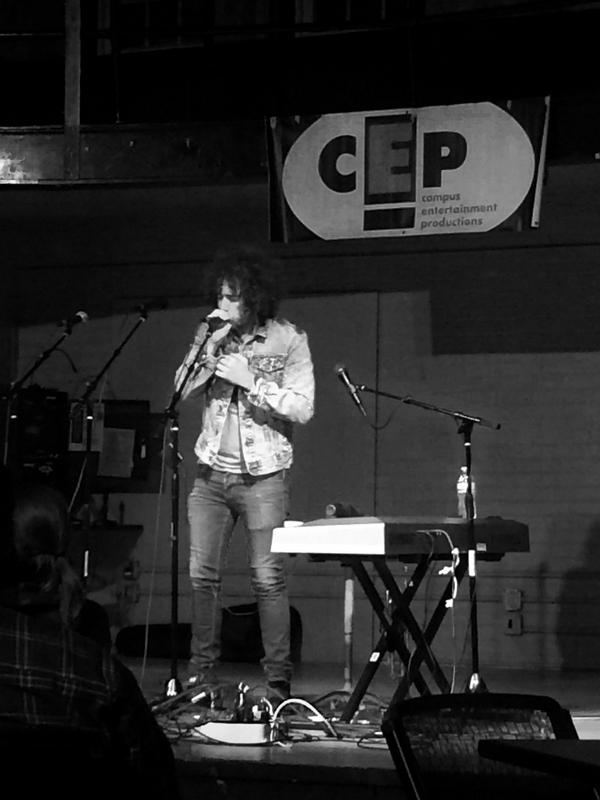 Independent singer-songwriter and rising talent, Ari Herstand, took to the stage, performing for BW students in the SAC for a Campus Enterainment Productions-hosted concert.

Campus Entertainment Productions hosted a concert October 11 in the Student Activities Center featuring a performance from rising talent Ari Herstand. Herstand is an independent singer songwriter based in Los Angeles who specializes in music looping.
Music looping is recording a small section of sound and then repeating it continuously on a loop throughout the song. Fans of Dave Matthews Band will be familiar with this process. Herstand uses this technique during his live shows to record and play all the separate parts of his music himself.
CEP was able to bring Herstand to Baldwin Wallace for the Saturday night concert, receiving a highly positive response from students. The audience connected with Herstand’s music because they were able to relate to his lyrics and the meaning behind his songs.
Herstand’s performance ranged from songs from his records that were personally reflective on experiences in his life, to a 90’s throwback jam session. Herstand’s most recent record, Brave Enough, features songs that tell the story of leaving his hometown of Minneapolis for Los Angeles, heartbreak, and stories of being on the road.
“He had a way of captivating his audience, and he made us feel as though we were going through his period of life when he wrote the songs.” Stephanie Kanetsky, the President of CEP, said.
“Ari was one of the most down to earth artists I have ever met. His songs told a story that a lot of students could relate to,” Kanetsky said.
As an independent artist, Herstand has had to do much of his production and promotion himself. Herstand has made the iTunes top 10, and has had many songs featured on television. Herstand has opened for bands such as Cake, Ben Folds, and Matt Nathanson. His most recent record, Brave Enough, was released earlier this year.
Along with being a successful musician, Herstand is also an aspiring actor and has co-starred on several popular shows such as Sam and Cat, 2 Broke Girls, and Touch. He will also star in the film, Secret Children coming out later this year through Fox-Japan.
Herstand also spent time after the show getting to know some of the students who were in the audience. He took the time to learn their names, find out what their majors were and what they wanted to do with them, and even sang a few songs with them.
“It has to be a memory they can cherish for a long time,” Kanetsky said.
Herstand’s performance drew the BW student community together, and allowed for a fun, alternative way to spend a Saturday evening.
“We had a blast and hope the audience did as well,” Kanetsky said.
CEP’s next event will be held on November 8.