“Another Perspective” on American Tragedy 9/11 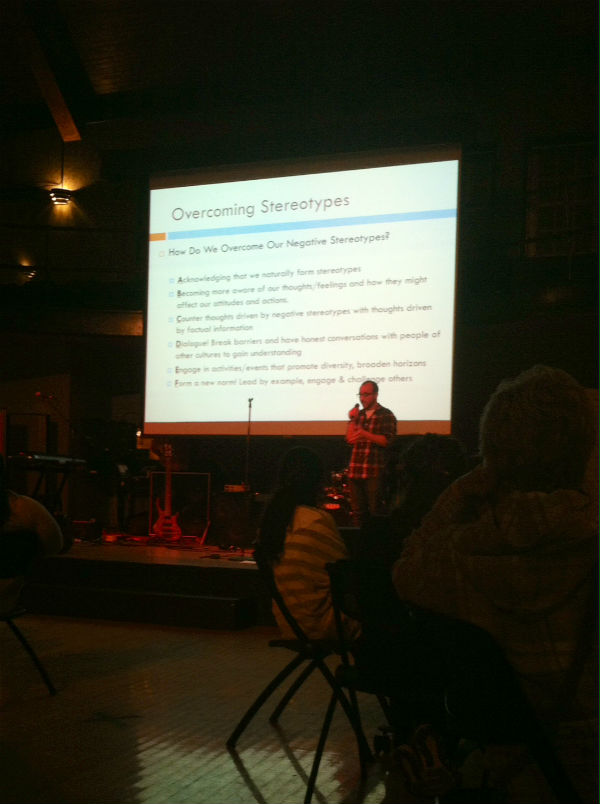 Al-Madani speaks to students about the effects of 9/11 on Arab Americans.

The Middle Eastern Cultural Club offered students “Another Perspective” with their event held in the Student Activities Center on Thursday Sept. 11.
The event, “Another Perspective,” was designed to provide students and the public with the opportunity to join a discussion about how the tragedy of 9/11 has since impacted Arab-Americans.
The event was opened by the band Bassel and the Supernaturals who came from Chicago to perform. The lead singer of the band, Bassel Al-Madani, then led a presentation to discuss racism and diversity.
“The subject is particularly close at home to me, because most of my extended family is in Syria.” Al-Madani said.
The presentation began with a brief overview of Islam and discussion of the differences between the terms Arab and Muslim. Al-Madani explained that Muslim is a faith term, and Arab is term used to describe someone from the Middle Eastern part of the world.
“Since 9/11 this is a sensitive area for a lot of people,” Al-Madani said.
Al-Madani went on to talk about Arab-Americans living here today. He spoke of how many Arab-Americans have faced negative stereotypes and opposition to their religion within their communities.
Al-Madani presented facts that showed how prominent racism against Arab-Americans is in the US.
There are about 3,500,000 Arab-Americans currently living in the US, and Ohio is one of the ten states where two-thirds of them reside.According to a survey, less than 81 percent of these people believe that suicide bombing and violence are not justified to defend Islam, and only 5 percent have a favorable opinion of Al Qaeda.
However, according to a New York Times Poll, one in three Americans believes that Muslim Americans are sympathetic to terrorists. On top of that 25 percent of those Americans have a negative opinion towards Muslim Americans and 55 percent of people know someone who does.
Ali-Madani has experienced racism personally since 9/11. He spoke of how he “tried to laugh it off” when people used offensive words or comments.
“[People say] that guy’s got a hyphenated last name we should stop him in the airport,” Al-Madani said.
According to the FBI, Muslim Americans experienced the second least reported hate crimes before the 9/11 attacks.
After, they rose to the second highest- an increase of 1600 percent.
“[They] took an isolated tragedy and related it to a giant group of people who do not agree with it.” Al-Madani said.
Al-Madani also included a few personal stories of Muslim Americans who had been wrongfully targeted simply because of their faith. One of the stories told was about a girl who was detained for six weeks after being suspected of being a suicide bomber.
“The people in these situations, their rights are removed because these stereotypes exist.” Al-Madani said.
Finally, Al-Madani spoke of why stereotypes exist, how we develop them, and how we can get rid of them for good.
“Be more aware of people’s thoughts and feelings, engage in events that promote diversity, and allow yourself to gain understanding of other cultures.”Al-Madani said.