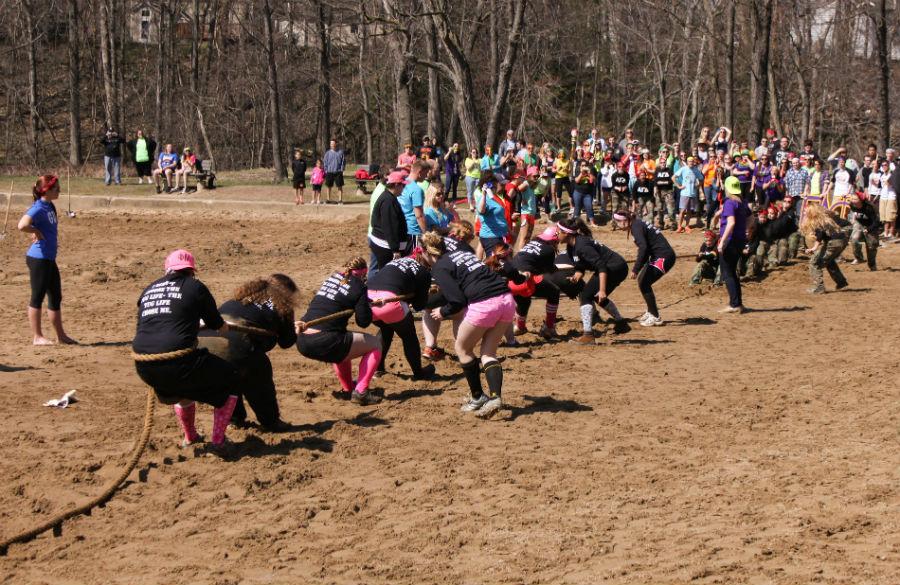 Baldwin Wallace University’s annual April Reign event was held Friday, April 11 and Saturday, April 12.  The event allows students to showcase some school pride and engage in friendly competition.  It is a BW tradition that has been kept alive for many years.
Originally, April Reign was called May Day. The name changed in 1999 when the university switched from the quarter-system to semesters.
The previous May Day celebration featured chariot races, a parade and floats in downtown Berea, and the crowning of the May Queen, who, as a senior, would eventually pass town her titled to another junior.  Freshman girls would also participate in a traditional May Pole dance to invite the coming of spring and the end of the semester.
However, from 1943 to 1946 BW had no May Day celebration due to World War II.
Nowadays, April Reign features a pyramid-building competition, obstacle course, celebrity concert/comedy act, tug, boat, an awards ceremony and an annual “Cheers to April Reign” barbeque.
This year, comedians Greg Proops and Jeff Davies from the popular improvisation show Whose Line is it Anyway? graced students with a Campus Entertainment Productions comedy show.
“It [May Day] was definitely more of a big deal back when,” said Jeremy Feador, Baldwin Wallace Archivist and Historian.  “It’s unfortunate that it’s not to the same level it used to be.”
According to Feador, May Day was an event that involved more of the non-student community of Berea. “I think really the parades are what gathered people,” he said. “The parade was kind of always a big thing”.  There was “a lot of fun and a lot of community building,” and the BW faculty was more actively involved in the celebration.
As the chariot races were replaced with a pyramid-building competition due to safety concerns, interest dried up in the downtown parade and student-engineered floats.
“It kind of just conforms to the times, I suppose,” remarked Feador. “It was a different time.”
However, April Reign still continues to provide an “opportunity to bring the campus together for a weekend,” Kathy Petras, the Secretary and Office Manager of the Student Life Center, said.
Although there are some groups and organizations that compete in every event of April Reign, participation in everything is not necessary
Participation is encouraged, but “the events are always fun to watch,” said Petras.
The excitement and chaos of April Reign is contagious, and the events change slightly every year.
Last year, trumpeters from the conservatory graced the opening events.  In the past, a group of male orientation leaders formed the “Bro Gammas,” a team spinning-off the name “Rho Gammas” from Greek Life recruitment.  They entered, won every award, and never competed again.
Petras said that her favorite thing about April Reign is that it brings the BW campus community together.  Faculty and staff judge events while students from many organizations compete for fun and prizes.  “I like to root for the underdog,” said Petras.
Both Feador and Petras are alumni of Baldwin Wallace University, and they encourage students to take part in the April Reign festivities.  “It’s important to be involved in things,” Feador said.