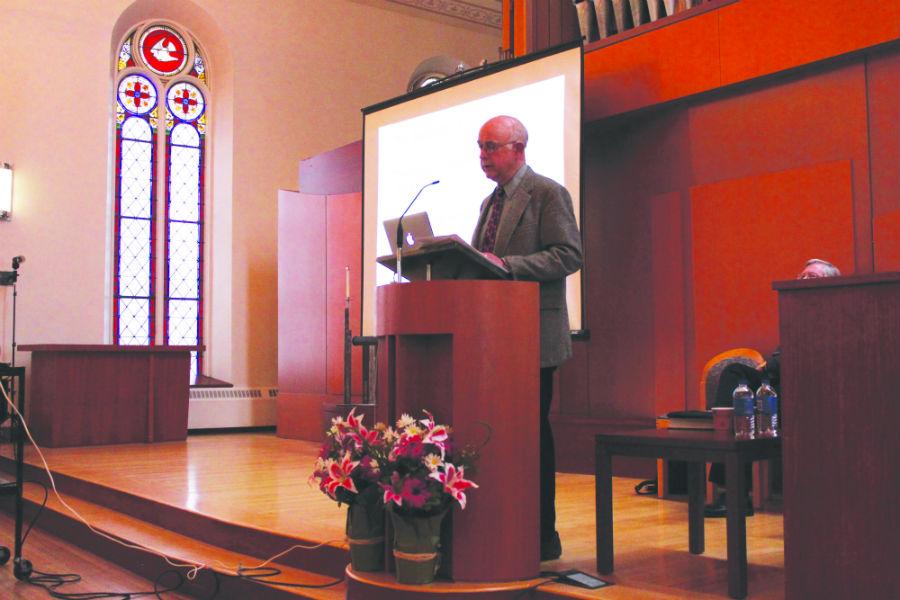 The Baldwin Wallace University Faith & Life Lecture Series presented speaker Dr. Paul F. Knitter Feb. 19 and 20.  He spoke about the modern American dilemma of being faithful to one denomination in a religiously complex world.
Knitter is the leading theologian of religious pluralism, beginning in 1964 when he was a seminarian in Rome during the Second Vatican Council.  Currently, he is the Paul Tillich Emeritus Professor of Theology, Religions and Culture at Union Theological Seminary in New York City.
The presentation began with Dr. Alan Kolp, Professor of Religion at BW and Chair for the Faith & Life Lecture Series.
Kolp introduced Knitter as “a really humble, engaging, thoughtful person,” and hopes that he will encourage students and the general audience to think more thoughtfully about spirituality.
Knitter described his journey through faith as many other people might: very personal.  He explained that the significance of “double belonging,” or feeling that personal beliefs and morals relate easily to more than one individual religion.  Knitter said this trend is growing in modern America.
As opposed to “religious tourism,” which Knitter described as “dabbling in the divine deli,” double belonging uses other religions to supplement the one that an individual was born into and brought up with.
Personally, Knitter found that Buddhism complemented his traditional Catholic faith, particularly relating more easily with Tibetan Buddhism than another sect of the religion. He recently published a book entitled Without Buddha I Could Not Be a Christian.
“God is working in other religions,” Knitter said.
Knitter then went on to describe his experience of studying in Rome during the Second Vatican Council, saying, “it was revolutionary.”
In the volatile spirit of Catholic Rome during this period, “Buddhism became a silent partner, a kind of a guide” to assist Christianity.
Now Knitter had to ask himself: “Was I a Buddhist-Christian or was I a Christian-Buddhist?”
“There were questions, I laid them out,” Knitter said. “Then I would look at the problems. What was the Buddhist commentary?”
Knitter emphasized that his goal was not to denounce Christianity, but rather to reinvent it.
“It’s to reinterpret, review, re-appropriate my Christian beliefs and experience with the help of Buddha,” Knitter said.
Knitter says that the key to true faith is to be in harmony with the unity of the divine.
“God is a verb,” Knitter said.  “God is the interbeing-ness of everything.”
“All of our language is fingers pointing to the moon,” Knitter states, restating the inherent limitations of language. Words and descriptions simply reference reality rather than strictly defining it.
Religion is important to some people because it states a belief in what happens after death, making it “more subjective than immortality,” Knitter said. He then questioned the selfishness of Christian beliefs in an afterlife and the objectionable concept of legacy and living on.
Buddhism practices the anatta, or the not-self.  “Our truest identity is to get beyond our individuality,” Knitter said.  To lose yourself is to find yourself, but Knitter warns that “what you find is not going to be what you lost.”
Knitter says it is important to remember that “life goes on, but it goes on beyond our individual identities.”
The speaker then went on to discuss the different interpretations of sin in each of these religions.
“Sin comes out of our ignorance rather than our constitutional fallingness,” Knitter said.
He proceeded to explain that “Jesus saves by revealing rather than fixing” and that Buddha “was such an effective teacher” because he saw humans as the children of God.
“There’s just too much noise going on in Christian rituals for me,” Knitter said. Thus, he is more supportive of Buddhism in the afterlife aspect.
The speaker also described his interpretations of being and making peace.
“In order to make peace, we first have to be peace,” Knitter said.
Knitter credited Buddha, saying, “Without love and compassion, there can be no justice.”  So to work toward a better community, people must be present in the present and the future will take care of itself in time.
Ultimately, while Paul Knitter prays to the trinity of Christ, the Gospel, and the Church, he dualistically worships Buddha, the Dharma, and the Sanga. He left his audience of students, faculty and community members well-informed of the Buddhist-Christian dialogue.