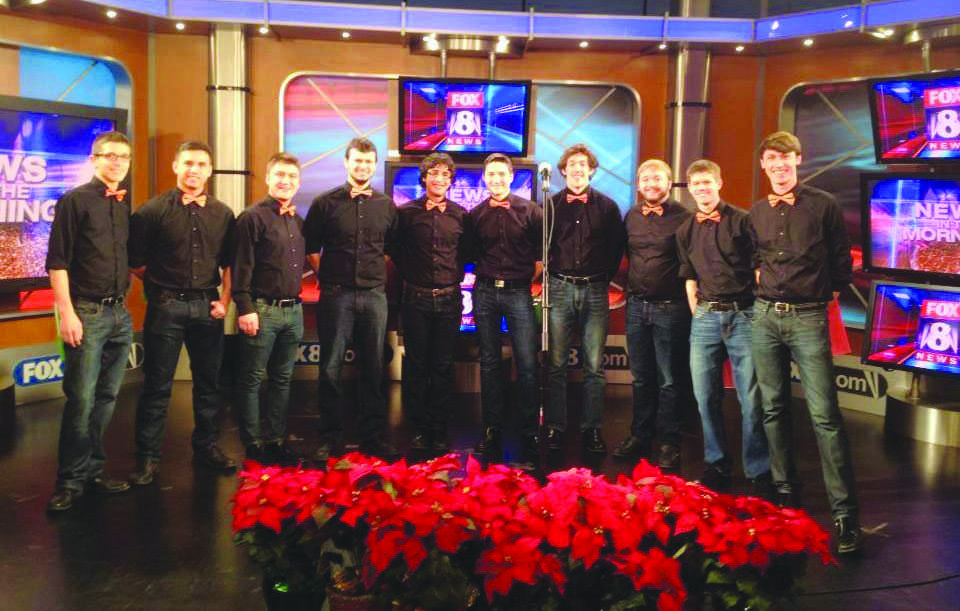 A capella music has taken Baldwin Wallace by storm as the residential all-male a cappella group, Mr. Sun’s Echo, gains recognition on campus and in surrounding areas.
Conservatory students Joel Logan and Joseph Zeigler started Mr. Sun’s Echo three years ago as a sub-group to the popular 120-member BW Men’s Chorus.
This a cappella ensemble is an audition-required group ranging from 12-18 men in size. Frank Bianchi, who directs the Men’s Chorus, also serves as the faculty advisor for Mr. Sun’s Echo.
Junior Josiah Bullach, a music performance major, and sophomore Peter Henkels, a double major in music education and vocal performance, are the current student leaders of Mr. Sun’s Echo. While Bullach is a leader, he also credits other members for their efforts in taking charge.
“I think of us more as a mutually led group. We all take turns arranging and leading songs,” Bullach said.
Mr. Sun’s Echo started small by singing at Christmas gigs, Midnight Madness events and Conservatory convocations. The group’s biggest performance to date was at the 2013 PRISM concert where they wowed the audience with their interpretation of Marvin Gay’s “Let’s Get it On” and gained real recognition on campus.
Last semester, Mr. Sun’s Echo was invited to sing on Fox 8 news in Cleveland and several local radio stations in an effort to promote the group.
They also participated in the Wooster Voice Fest where they competed against other a cappella groups from Oberlin, Kent, Ohio State and others.
“The group as a whole is more outgoing with the repertoire now. This year we’re starting to add choreography, which is a large step for us,” Bullach said.
Aside from making great music, the members of Mr. Sun’s Echo spend time bonding outside of performances and practices. “I love having the chance to make such cool music with a bunch of guys. It’s such a tightly knit group,” Henkels said.
“I like the spontaneity of our group,” Bullach said. “One time we were on our way back from a gig at the IX center and we ended up serenading some Burger King employees.”
Mr. Sun’s Echo practices two nights a week, twice as much as when the group started. The group has also matured in their style and image.
“We used to sing in a more comedic, barbershop quartet style. Now we do more pop songs but we still try to put our own sexy/silly spin on them,” Bullach said.
Mr. Sun’s Echo will be performing next at the High School Men’s Chorus Festival on Feb. 15 at Cleveland Heights High School Auditorium where they will sing  “Let’s Get it On” and Bryan Adams’s “Run to You.”