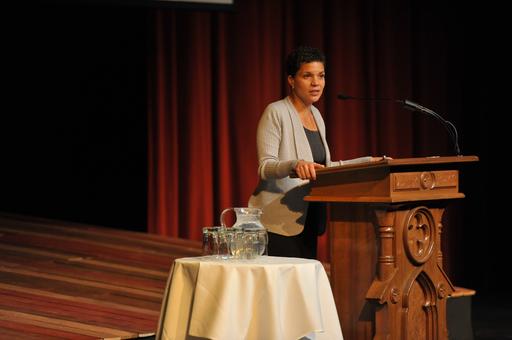 Baldwin Wallace students, faculty and members of the Berea community gathered in the John Patrick Theatre Jan. 23 at 8 p.m. to hear local civil rights lawyer, Michelle Alexander, present her argument about the apparent bias of America’s legal system against people of color. The lecture was part of the Mark Collier Enduring Questions Lecture Series and was included in the Martin Luther King Jr. Week festivities.
Alexander is an Associate Professor of Law at Ohio State University and has taught at a number of schools in the past, including Stanford Law School.  Before teaching, she served as the director of the Racial Justice Project at the American Civil Liberties Union in northern California.
Alexander began the presentation by referencing MLK and asked the audience what he would think of modern America’s civil rights situation.  Alexander believes that he would not be impressed.
“The truth is, we’ve allowed a human rights nightmare to appear on our watch,” she said.
Citing examples from statistics involving the mass incarceration of African Americans, Alexander stated that the flawed criminal justice system has locked poor people into a cycle of permanent second-class status.  Although the persecution of blacks today is not the exact equivalent of Jim Crow laws, Alexander agreed that they are the “moral equivalent” of those obsolete acts.
From the moment they are first thrown in jail, black men are “permanently unemployable in the legal job market,” Alexander said.  They are forced into a cycle of paying off debts and relying on illegal activities for money and then being sent back to jail as a result of those activities.

In Chicago, Illinois, “nearly eighty percent of black men of working age are being reduced to a growing under-caste,” Alexander said.  Many Americans are aware of these statistics, but plead ignorance because it is a touchy topic that many try to avoid.
She said that instead of focusing on gun control – which is a policy that she supports – America should focus on increasing the number of available jobs, schools, and opportunities available for less fortunate people.
“Rather than good schools we have built high-tech prisons,” Alexander added.
Over the past thirty years, the population of incarcerated Americans has skyrocketed from three hundred thousand to two million people.  The number of people in prison for drug conviction has increased by two-thirds.  According to Alexander, while people of all races sell and use illegal drugs, black people are being targeted as a side-effect of long-lasting stereotypes.  Their incarceration further prevents them from smoothly transitioning into society post-sentence: they are often denied public housing, food stamps, and other basic human rights.
Alexander proposed two basic steps to address this problem.  The first was to tell the truth about the reality of mass incarceration, making it visible and relieving colorblindness.  The second step was to work with rehabilitative and restorative public health models rather than the vicious cycle of incarceration.
Angela Vance, a first-year student, enjoyed the message of Alexander’s speech, “Michelle Alexander was amazing beyond words.  It is really insane how our incarceration system is the moral equivalent of the old Jim Crow laws; we have simply redesigned it.”
The presentation was followed by a standing ovation, a brief Q & A session with audience members, and a reception/book signing for Alexander’s latest book, “The New Jim Crow: Mass Incarceration in the Age of Colorblindness.”