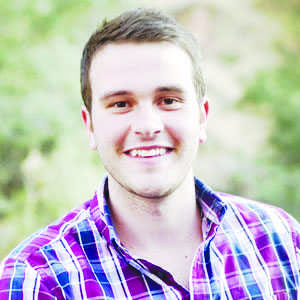 Speaker, Jake Byczkowski, took a unique approach to alcohol awareness with Baldwin Wallace University students in his Oct. 30 talk, “The Solo Cup Culture: Minimizing the Risks of an Alcohol-Soaked Climate.”
Byczkowski, a graduate of the Ohio State University and a brother of Delta Tau Delta Fraternity, developed the “Solo Cup Culture” idea to try to answer the question of why so many students continue to drink in spite of the negative consequences associated with drinking.
Byczkowski’s mission is not to grill students on why they should not drink, but to make them think about the choices they make while drinking. He accomplishes this by sharing personal stories and pictures of his time in college.
“My life centered around alcohol in college. I would drink until four in morning and blast music until I got yelled at,” Byczkowski said.
In college, Byczkowski was often known as, “Black Out Byczkowski” because he would often black out and not remember what had happened the day after a party.
“I was the bringer of the party. I would pretend to be a DJ without having equipment or even a microphone,” Byczkowski said.
Byczkowski did not think he had a problem until a friend approached him telling him about his actions.
“I knew I wasn’t an alcoholic, but his talk with me made me think about my actions,” Byczkowski said.
People should be aware of the actions that happen when they are drunk. If their actions are harmful then someone should tell them.
“If you are punching holes in the wall every time you are drunk, then you should really reconsider how much you drink,” Byczkowski said.
One main point he focused on was that alcohol-related harm may not always be the symptoms we get from drinking too much; instead, it is the actions we do while intoxicated that may cause the harm.
Byczkowski said, “I realized I had an alias as I drank. I was not the same person I was drunk as I was sober.”
The first point of his talk was called, “Social Support.” Byczkowski spoke about people who are more likely to drink when others are pressuring them to do so. Drinking is perceived as something “cool” to do in college, and people want to fit in said Byczkowski.
Byczkowski’s next point was called, “The Thrill.” According to Byczkowski, drinking gives people a thrill. They do not know what is going to happen if they drink, and that is exciting to them.  Byczkowski said they expect to have a great time.
His last point focused on how people have a tendency to embarrass themselves while drinking.
Byczkowski said people often find the stupid things they do funny when they are drunk and like having stories to tell about the “show” that happened at a party.
Throughout his talk, Byczkowski also came up with a list of different types of drinkers.
He divided them into responsible, those who can control their drinking; the hopeful, those who do not have control, but know their actions; and the reckless, the ones who have a real problem.
Byczkowski’s last point emphasized that students need to look after each other. If someone cannot control their actions or becomes a reckless drinker, a friend needs to step in to help them.