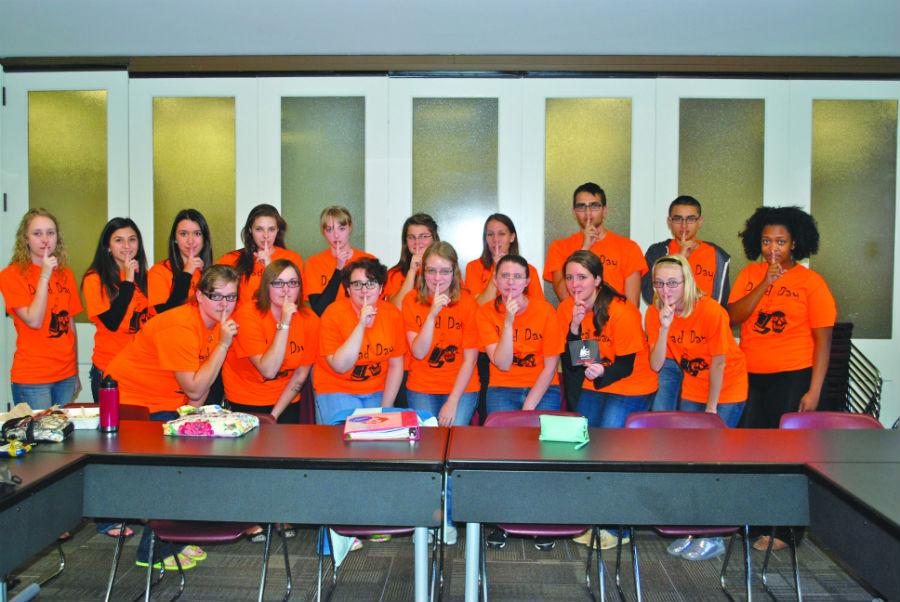 Nearly 2000 college aged students die each year from alcohol related accidents. To make Baldwin Wallace students more aware of the dangerous consequences of drinking irresponsibly, Baldwin Wallace Informed Student Educators, BWise, hold their Alcohol Responsibility Awareness Month every October. BW has participated in Dead Day for about 10 years.
In honor of the students who have passed away from alcohol-related accidents, BWise sponsors their annual “Dead Day” event, an event for students to remember those who have lost their life due to an alcohol-related death.
Participating BW students remain silent from the time they wake up until around 5 or 6 p.m. to represent someone who has lost their life due to an alcohol -related accident.
When the students who volunteer to participate in Dead Day pick up their t-shirts, they receive a card with information about the person they will be representing. The card includes their name, age, a death date, and what happened to them.
“My person’s name was Amber,” said senior Alisa Cubbison. “She was 20 when she died and she was underage drinking. She got in a car with her boyfriend, and in the back of the car there was charcoal burning. She ended up either asphyxiating, or the car ended up burning, but they didn’t find the cause of her death; however, she was drinking so she made some pretty big mistakes while she was drinking.”
“Alcohol Responsibility Awareness Month shows the first years that not everyone on this campus drinks, and there are many consequences to drinking irresponsibly,” Cubbison said. “Even when you’re drinking responsibly a lot of scary things can still happen.”
Student Director of BWISE and senior Julie Chambers says that Dead Day really hit home with a few students.
“These students might have had someone else in their life that has died due to an alcohol related accident,” Chambers says. “It makes me feel good that I helped with this event because people do get something out of it. And it does make a difference to people that have had a personal connection with this issue.”
Chambers believes that even though only a small portion of the campus partakes in Dead Day, it still has a big influence on the students.
“I know a few of the students that participated said it helped them understand what it means and just how much of an impact people that lose their life due to an alcohol related accident  has on others,” Chambers said. “Overall it does kind of open people’s eyes. I think it reminds people how fragile life is.”