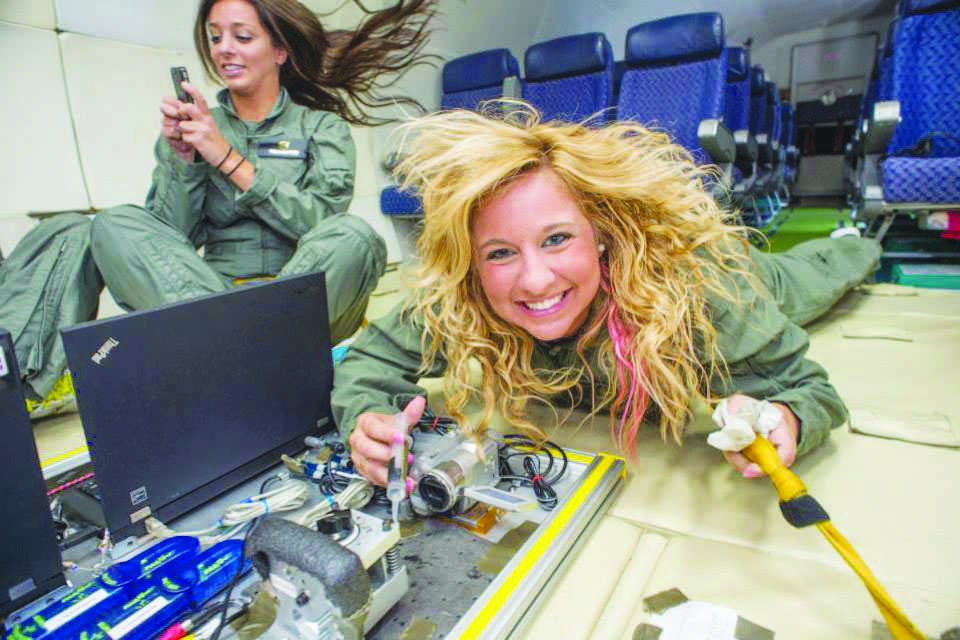 Carissa Bonus and Logan Sirline in flight in the Weightless Wonder.

The 2013 Reduced Gravity Student Flight Program took place at the Johnson Space Center in Houston this past July, and NASA selected five Baldwin Wallace University students to participate in the program.
Junior Maia Matyas, Seniors Judson Sprandel and Logan Sirline, and 2013 graduates Carissa Bonus and Sarah Rospert were accompanied by BW physics professor Dr. Greg DiLisi to conduct experiments on the “Microgravity University” plane.
DiLisi, who also works as a professor of Science Education at John Carroll University explained what a great honor it was for a small private school to be chosen for this project.
“You look at the list, and most of the accepted projects come from large state-supported research institutions, so we feel great about being chosen for a slot,” DiLisi said.
The BW experiment focused on liquid bridges. As explained by DiLisi, “Liquid bridges are small strands of fluid that form across neighboring supports. Simply dip a fork into a cup of maple syrup and you will see thin, cylindrical liquid bridges of syrup span the tips of the fork.”
“Scientists are interested in liquid bridges for a variety of practical reasons, so our experiment will have real world applications,” Rospert, biology major, said.
“[DiLisi] personally asked each of us if we would be interested in working on a research project,” Sirline, a neuroscience and chemistry major said. “As a chemistry major, the project really sparked my interest. I was responsible for choosing the liquids that we would use to make the liquid bridges based on their physical properties.”
As part of the pre-flight meetings, students were introduced to the “Weightless Wonder” zero gravity plane, also known as the “Vomit Comet.” The Weightless Wonder earned this notorious nickname because one-third of those who fly in the plane become violently ill, even with anti-nausea injections.
The team took two separate flights, experiencing thirty extreme parabolic maneuvers over the Gulf of Mexico, each producing twenty seconds of near weightlessness or “microgravity.” The entire flight lasted nearly two hours.
“The experience was something I will never forget and I am so fortunate to have been blessed with that opportunity. The feeling of weightlessness was unreal. To experience that 30 times was even more amazing,” Sirline said. “It was truly special and something that I will continue to talk about forever.”