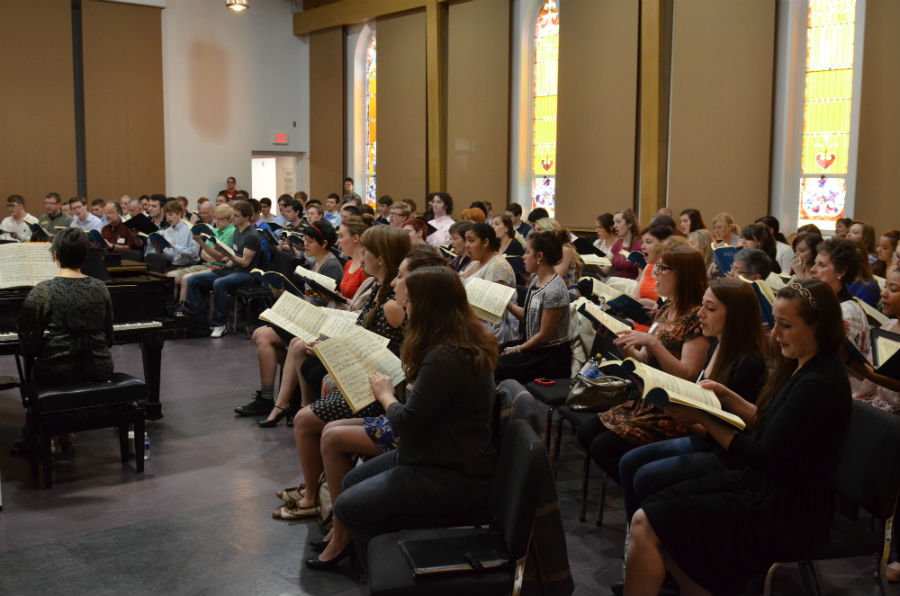 Conservatory students and faculty celebrated the 81st annual Bach Festival April 19-21. The Bach Festival is a long-standing tradition at Baldwin Wallace and is the oldest collegiate Bach Festival in the nation.
The festival began in 1933 by the efforts of Albert and Selma Reimenschneider who wanted to create a tribute to the famous composer Johann Sebastian Bach.
The festival cycles through Bach’s four major works for chorus and orchestra in sequence, so that Conservatory students and festival attendees can experience the B-minor Mass, the St. John Passion, the St. Matthew Passion and the Christmas Oratorio over a four year period.
Each year, famous vocal and instrumental soloists are invited to sing and perform in the festival. The festival has grown over the years from two concerts to an entire weekend celebration, with additional concerts and associated presentations by Bach scholars, Conservatory faculty and national and international commentators.
Erika Haskell, Conservatory Event Coordinator and chief Bach Festival Coordinator, starts planning for each Bach Festival far in advance.
“We’ll start planning for next year’s festival before this year’s festival is over,” Haskell said. “It takes a full year to plan the festival from booking the artists, to planning the schedule, to hiring the instrumentalists, to making the program.”
This year is Haskell’s fourth year planning the festival. Each year, she hires arts management students as interns to assist her in the office throughout the semester.
The Bach Festival incorporates students in all of its aspects. Student instrumentalists and vocalists participate in the concerts, student drivers are paid to chauffeur the invited artists during the festival and students are responsible for planning many of the parties and events.
“It’s a privilege for the students to participate in such a noble and nationally recognized legacy. To be able to sing or see all four of the major works from freshman to senior year is a unique experience,” Haskell said.
One of the Bach Festival’s much-anticipated traditions is the performance of the Festival Brass Choir in the Marting Hall Tower. The Baldwin Wallace Brass Choir is directed by faculty trumpet instructor John Brndiar.
This year the ensemble almost had the privilege of performing in the newly refurbished cupola on top of the building, but high wind advisories on the day of the performance caused the performance to relocate in Kulas Hall.
The Brass Choir looks forward to christening the new renovation to Marting Hall at next year’s festival.
For next year’s 82nd Annual Bach Festival the faculty, students and invited artists will be performing Bach’s St. John Passion. The festival will take place April 25–27. Student tickets are sold at the reduced price of $10.