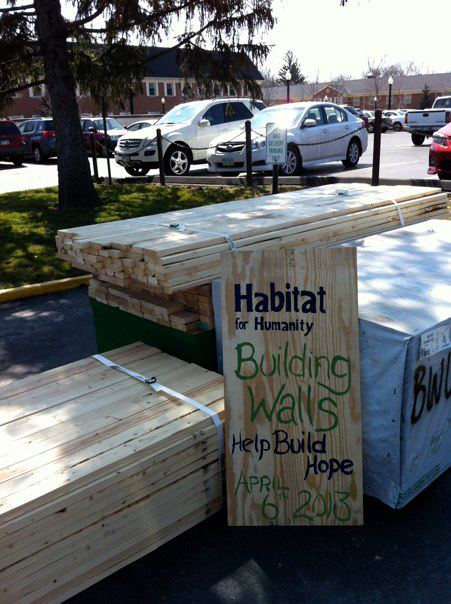 Habitat for Humanity prepares its supplies for the Building Walls event

Students built the walls of an entire home on the Baldwin Wallace University campus as part of Habitat for Humanity’s Building Walls event April 6. The walls were then shipped to another location where the home will be completed.
Building Walls was a culmination of over a year of hard work by junior Heather Schier, current president of Habitat for Humanity, and the members of this organization.
“We wanted to do something that could incorporate all our members,” Schier said, “and something that other people on campus could get involved in.”
Schier and the other members contacted Crossroads Missions, a service that built houses for families in need, to bring their services to Baldwin Wallace University.
“They were super easy to work with,” Schier said.
Student Senate as well as other organizations on campus provided funding for the event. The build took place in the Bonds parking lot with over 70 students helping to construct the walls. The main framework and interior walls of the house were completed in less than seven hours.
“Overall, the morale was awesome, and due to the organization of Crossroads it went so smoothly,” Schier said. “With enough funding and interest, I’m hoping to do two houses next year instead of one.”
The history of Habitat for Humanity’s involvement on campus has not always been this successful. Originally a part of the Office for Community Outreach, Habitat for Humanity broke away and suffered a severe decrease in membership and participation in general.
The organization was on the brink of collapse when Schier was encouraged to participate in its Alternative Spring Break trip her freshman year.
“Most of the others were seniors,” Schier said.
Because of this, Schier was the only active member left when she returned for her sophomore year.
Schier was determined to fix the organization from the inside out, and soon a few other members joined that year to aid in Schier’s efforts.
“We kind of helped rebuild it,” Schier said. With the new members, Schier implemented off-campus events where eight volunteers would go to the Greater Cleveland area to do a range of services, such as paint homes. The organization also continued to do an Alternative Spring Break trip and added a Winter Break Trip as well.
Still, trips off-campus for eight volunteers and Alternative Breaks were not enough to include all 60 active members of Habitat for Humanity. The idea of an on-campus building day started to form from this concern.
After the success of Building Walls, Schier is already looking to the future of Habitat for Humanity. She’s hoping to have the chapter at BW officially recognized by the larger Habitat for Humanity Organization and plans to continue the monthly volunteer trips as well as the Alternative Breaks.
“The leadership and the people involved are the reasons we can do these things,” Schier said.