During his last open gym before the start of his first semester at Baldwin Wallace, outside hitter Marquis Kelly’s volleyball career — and life — were altered in one moment.

Kelly came down awkwardly from a jump, fully rupturing his ACL and MCL. His recovery has been neither straightforward nor easy.

Kelly, a first-year English major and Education minor from Phoenix, Ariz., came to BW to both extend his volleyball career and build his resume. A three-year varsity captain at his high school, he created a highlight reel to send out to Division I coaches before a recruiter recommended looking into Division II and III programs as well. His academic future was also a factor in the decision-making process.

“[BW] has a pretty good reputation as far as their education program,” said Kelly. “Getting my degree here sets me apart from other applicants that I’d be stacked up against in my field of work.”

Before ever practicing or taking a class at BW, Kelly’s unfortunate jump changed the course of his semester and season. The surgery to repair his ACL and MCL was delayed until October due to a positive COVID test, and he is now about halfway through his recovery period. 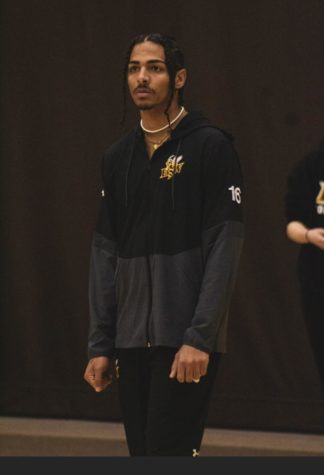 Beyond the obvious physical challenges and taxing amount of physical therapy required to recover from his injury, Kelly has had to overcome a variety of mental obstacles as well. In his years as a football and volleyball player, he’d never dealt with an injury as significant as this one. Not being able to physically participate in training and the season is difficult for any athlete, especially someone as dedicated and competitive as Kelly.

“I hold myself to a very high standard in terms of my athletic ability and my competition,” Kelly said. “It was mentally and emotionally taxing to be in the gym and give verbal and emotional support to my team but not be able to show them that physically.”

Kelly’s injury has presented other forms of mental adversity as well. Usually a high-performing student, he struggled academically last semester. Additionally, an injury that affects a student-athlete’s mobility can lead to some social barriers as well; when he was using crutches, Kelly wasn’t always physically able to hang out with members of the team, even outside of practices and lifts. For a first-year college student, that type of disappointment that can ruin an exciting and rewarding semester.

Although the past six months have been challenging in many ways, things seem to be on a positive trajectory now, both mentally and physically. Kelly no longer needs crutches and participates more in workouts and practice, and his teammates have been supportive and encouraging throughout the entire recovery process.

His teammates Andrew Soriano, Michael Devlin, and Reed Fisher have helped him through some rough moments. Head Coach Kyle Mars has also met with him regularly to check in on his well-being and help him improve as a player, and trainer Sam Reagan has encouraged him to rely on others and stay strong mentally. Outside of BW, Kelly’s mom and older brother have served as role models for him and supported him through this and other trials in his life.

Despite the support from his team and family and the encouraging trajectory of his recovery, Kelly understandably still has reservations about returning to the court. “There’s always that, ‘what if it happens again?’” he said. “Once I am able to play again, a big worry for me is coming back and not even being where I was before my injury and not pushing past that.”

Kelly is committed to volleyball for the long haul, not just four years of college. His reputation as a leader is well-earned – he started two other programs in the Surprise, Ariz. area, and he plans to extend that impact in his career. He plans on teaching and coaching volleyball at the high school level and potentially the collegiate level as well.

“For volleyball, there’s only a few levels you can play at,” Kelly said. “So I figured the next best thing is to keep my love of the game and pass it on to others.”

Although the road has not been easy, Kelly has done what the best student-athletes do when one part of their complex and busy lives is upended: fight through it and look ahead. He won’t be able to fully practice until June, but he is maintaining a level head and preparing to return to the court as the athlete and leader that he has proven himself to be.