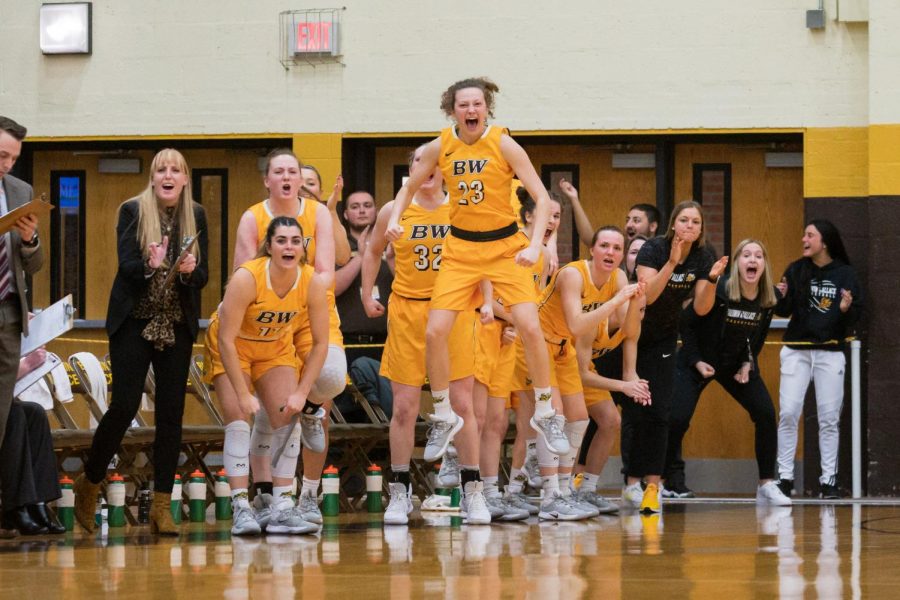 From the opening tip off, the No. 9 nationally ranked Baldwin Wallace Women’s basketball team forced the visiting Haverford College Fords to play their style of basketball.

With stout defense, and deadly three-point shooting the Yellow Jackets surged and knocked the Fords out of the NCAA tournament, 67-42.

Head Coach Cheri Harrer said the thing fueling the Yellow Jackets on Friday, was the same they used throughout the OAC tournament: their idea of BW basketball, “When they did the pairings they talked about Haverford’s stingy defense and I think we kind of took that as a challenge,” Harrer said. “We feel like we play a pretty stingy defense as well and pride ourselves on that.”

Leading the Yellow Jackets on offense were their trio of All-OAC seniors, Kasey Hughes, Hannah Fecht and Riley Schill, who combined for 35 of the 67 points that BW scored. Also hitting double digits was the reigning OAC Freshman of the Year, Lily Edwards, who notched 13 points of her own.

Harrer said her seniors set the

tone on and off the court, “Our seniors awesome, they really are,” Harrer said. “They’ve done everything we have asked them to do. They’ve created our culture; they lead our whole team and they do so many good things on the court.”

As soon as the game tipped off, BW locked in. After scoring the opening bucket BW maintained the lead for the rest of the game. Their defense suffocated Haverford, going on a 13-0 run in the first quarter and took a 22-6 lead into the second period.

The second quarter was a near carbon copy for BW. They held Haverford to just six points on 3-15 shooting, and on offense they stretched their lead out to as many as 27 before going into half time with a 37-12 lead. After that, it was up to the defense.

Even with the big lead, the second half wasn’t smooth sailing for the Yellow Jackets.

In the third quarter, Haverford doubled their score. Though BW’s defense held them to just 2-11 shooting, the Fords took advantage of everything given to them and were able to go 8-8 from the free throw line.

In the meantime, BW’s offense stayed hot, and converted on 7-17 shooting, and at one point held a 35-point lead over Haverford. Schill was the first to hit double digit scoring in the game for either team, marking the third time in the four postseason games that she notched more than 10 points. For Schill, who led the Yellow Jackets with 14 points, knowing that it could have been any one of the Yellow Jackets scoring is what makes them dangerous, “It makes it really fun out there,” Schill said. “It takes the pressure off of us knowing that you can rely on your teammates to score when you need a bucket.”

Now the Yellow Jackets turn their attention to the Round of 32, where they will take on the University of Chicago inside the Ursprung Gymnasium. “They play a very similar style to how we play, where today was a contrasting style tomorrow will be whoever does what they do better,” Harrer said. “Chicago is

really good and they play great competition all year long. It’s going to be a battle, but I at least know our kids will compete and we’ll see what happens.”