Jacket Nation:Team Updates from Around Campus 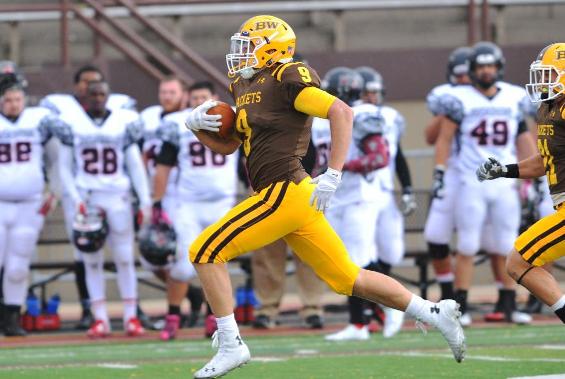 Luke Riemenscneider scores on an 86-yard fumble recovery for a Finnie Stadium record.

Football
Junior quarterback Tyler Moeglin (Canton/ St. Thomas Aquinas) threw three touchdown passes and rushed for one to lead the Baldwin Wallace University football team to a 35-7 victory against Muskingum University before 3,129 fans on Tressel Field at The George Finnie Stadium on Homecoming.  BW (2-2, 1-2 OAC), who has now won nine straight games against Muskingum (1-3, 1-2 OAC), led 7-0 after one quarter, 14-7 at halftime and 21-7 after three stanzas. With its win, BW increased its all-time series advantage against that began in 1917 to 43-13-2.

Soccer
The Baldwin Wallace University men’s soccer team tabbed its fifth and first conference win of the season against Muskingum University, 4-1, Saturday afternoon at McConagha Stadium.
In the first half,  BW (5-7, OAC 1-0) scored the first points of the game at the 11:52 mark by freshman defender David Elsen (Cleves/St. Xavier).
BW attempted 18 shots near the net to MU’s one and had seven shots on goal.
In the second half, the Yellow Jackets continued to attack the net as Cody Smith scored his first goal of the game at the 45:12 mark as he beat his defender one on one.  The Yellow Jackets upped their lead to 3-1.  At the 65:25 mark BW’s Zach Smith scored his fifth goal of the campaign to give the Yellow Jackets a 4-1 lead and sealed the victory for BW.

The Baldwin Wallace University women’s soccer team tallied its first conference win of the season against Muskingum University, 3-1, Saturday afternoon at McConagha Stadium.
In the first half,  BW (5-6-1, OAC 1-0) would find the back of the net seven minutes into the match as senior midfielder Nicole Boyd(Warren/Howland) would score her first goal of the season to put BW up 1-0.
BW has won four of the last five matches and outshot Muskingum 19-12.  Senior goalkeeper Emily Tallmadge (Fairview, Pa./ Fairview) earned her fifth win of the season with three saves.