Senior Golfer Has A Plan On And Off The Course 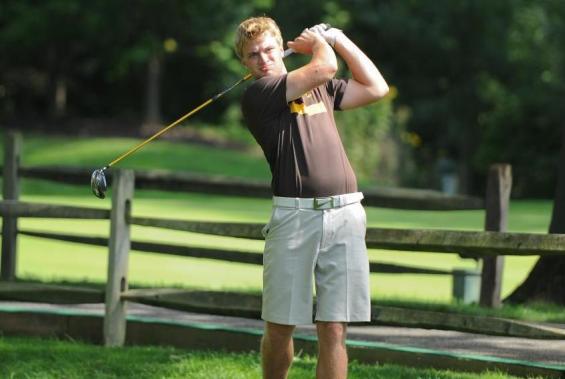 Senior Augie Ward carded an 84 at the OAC Conference Tournament on Sunday, April 27.

Senior Augie Ward is the man with a plan.  As a freshman at Kent State, he knew that he wanted to play golf in college so he transferred to Baldwin Wallace before the year even ended, and now he’s a four year letter winner with the Yellow Jackets.  As a senior preparing to graduate, the business administration major also has his post-college life planned as well, as he has a job already lined up with energy broker Lynn-Chris Energy in New Mexico once he graduates.
In his four year career with the Yellow Jackets, Ward has been a pretty solid player for BW, posting an 80.70 career stroke average, with a best round of 71 against Muskingum during the spring of 2013. Also, during the fall of 2012, Ward just missed placing on the BW men’s golf top 20 season stroke averages, with a career high 79 average.  This season Ward has hit 77 strokes twice during the OAC Invitational Tournament and the John Carroll Invitational.
Ward has a pretty normal warm-up routine when it comes to getting ready for these tournaments but he does place an emphasis on stretching, saying that flexibility is one of the most important parts to his game, and he’s made sure to make that a focus when he trains to golf.  He also enjoys listening to classical music when he warms up, with Mozart and Beethoven being some of his favorite artists, and Beethoven’s 40th being one of his favorite pieces.
Although his warm up routine focuses on staying level headed, he can be superstitious when he plays.  “I can be a little superstitious when I play, like I use the same ball mark and one time I was playing well, and I kept my hat on even though it was starting to get a little warm outside.”
As a player, Ward said that just the opportunity he got to play at BW was his favorite moment, and as a fan he got to go to the Masters in 2009 where he watched his favorite player Tiger Woods finish in a tie for sixth.
After he is done playing at BW, Ward said that he would like to continue playing and participate in whatever local tournaments he may be able to. For any aspiring golfers, he says “Just have fun and don’t be too hard on yourself, and find a coach. Definitely find a coach.”
Ward has been golfing for about twelve years now, and has had numerous accomplishments all throughout high school from being named a Plain Dealer “Player to Watch” to having a very solid four year career with the Yellow Jackets along with having a job lined up before his schooling is even done with, and he has done all of it through hard work and determination.