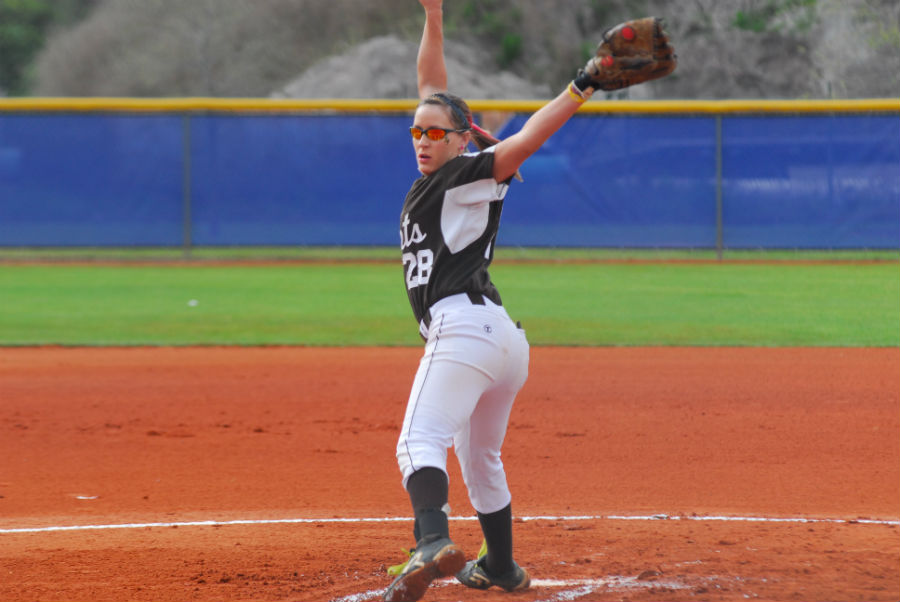 Senior Tabitha Murray has a batting average of .412 and an ERA of 3.39 so far this season.

When Tabitha Murray is on the mound, nothing else matters. All she cares about is getting the next batter out and all she can hear is her father telling her things like “There’s no defense against a walk.”
Using her father as a source of motivation, the senior exercise science major was able to become the first pitcher in NCAA history to pitch consecutive perfect games on the same day just over a year ago, and continues to excel as she currently has a .412 batting average on the year while only letting opposing batters hit .254 against her and posting a 3.39 earned run average.
The key to her game that allows her to succeed consistently is concentration.
A lot of her game depends on feel, as she doesn’t necessarily have speed on her pitches but she makes up for it with the movement on her pitches.
“In softball you’re either fast or you have more movement on your balls, and I think I have more movement,” she said. To get that feel for the game, she has to be extremely focused on the goal at hand, which is getting batters out.
To get to that level of concentration, Tabitha listens to an interesting playlist of artists before the game that includes artists ranging from Breaking Benjamin and Disturbed to Eminem and Nelly, and although that attentiveness may be an important part of her game she does admit that “I can’t concentrate on any of my classes and I do get nervous before every game, I don’t know why.”
As soon as that first pitch is thrown though, she is locked in to the game, so much so that at one point she didn’t even know she was throwing a perfect game.
“I didn’t even know I was throwing a perfect game…I thought I walked someone, I didn’t even know,” she said.
When she was a few innings away from a second perfect game, all of that started to change.  “In the last few innings I was like ‘Oh my God I might do it again.’”
To date, that is the senior’s biggest accomplishment in the sport of softball, and as her final season in a Baldwin Wallace uniform is winding down, she said she will leave college softball with no regrets.
After she is done with college she is hoping to become some type of personal trainer or coach, although she has not ruled out trying out for the Akron Racers, a professional softball team.
No matter what path the rest of her life may take her though, if she has the same level of concentration, attention to detail and focus that she does while playing softball, look for this Yellow Jacket senio