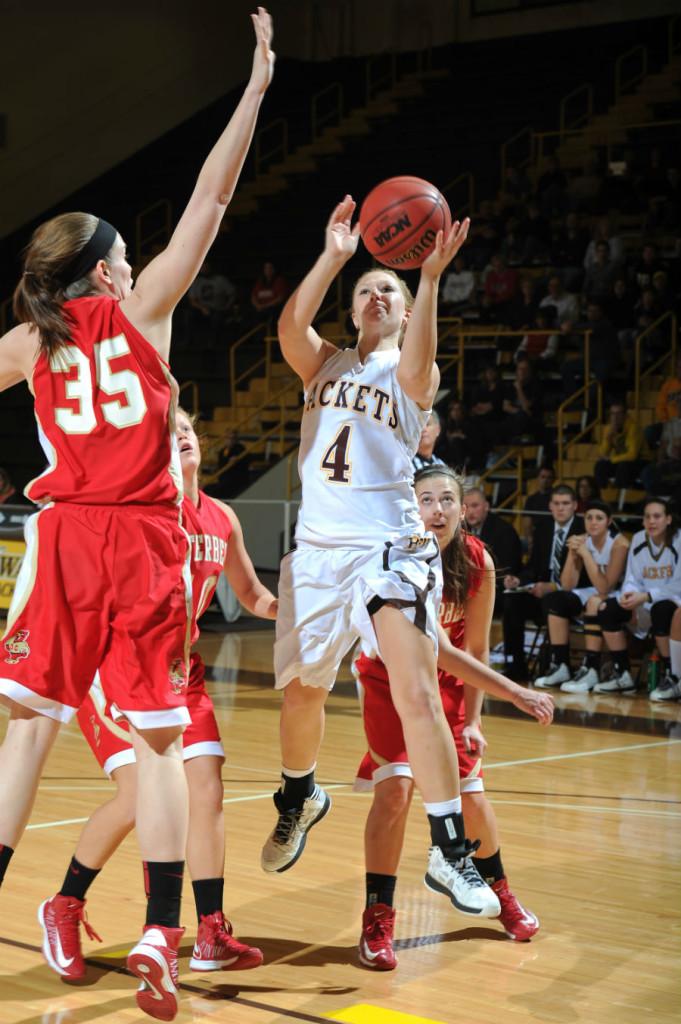 Frisina is a double major in Business and Sport Management, and she maintains a 3.78 GPA.

Baldwin Wallace University Senior Guard, Megan Frisina, is the consummate example of what is right about collegiate athletics. She has been described as the perfect teammate, a scholar, and personable, but above all Frisina is a genuine leader on and off the court. Just ask her coach, friends and family.
Standing behind most successful people are their biggest fans, the people who love them most, their families. Over the last four years, it was almost certain Lisa and Steve Frisina, Megan’s parents, were in the stands at Ursprung Gymnasium at BW women’s basketball home games. They only missed two of Megan’s home games in her four years at Baldwin Wallace. Lisa and Steve, who are both teachers, made the five hour round trip drive from Corry, Pennsylvania to Berea, Ohio to see their daughter play home basketball games for the Yellow Jackets. Lisa stated, “We just want to be where she is.”
If that meant driving through blizzards or having to sacrifice sleep to see a 7:30 p.m. Wednesday night game, drive home and then wake up at 5 a.m. Thursday morning to teach elementary school, they were still going to make the trip. They are proud of Frisina’s accomplishments on the court and in the classroom. Her parents are especially proud of her work with physically and mentally disabled children.
Megan said of her parents,
“They’ve been very supportive of me since I started playing basketball 15 years ago. The sacrifices they’ve made to support me have meant a great deal.”
Frisina is a double major in Business and Sport Management, maintains a 3.78 grade point average, and holds several academic honors. She is a Jacket Scholar, a member of the Dean’s List, and a member of three honors societies including Alpha Lambda Delta, Chi Sigma Alpha, and Dayton C. Miller. Only four percent of undergraduates at BW achieve membership into Dayton C. Miller Honor Society. Megan also currently serves as a leader of the Baldwin Wallace University Sport Management Club.
Megan is passionate about helping children with physical and mental disabilities. She worked an Adapted Sports summer camp associated with the Achievement Centers for Children.
The organization’s website describes its adapted sports programs, saying “Adapted sports are competitive sports for individuals with disabilities. While the adapted sports often parallel existing sports played by able-bodied athletes, there may be some modifications in the equipment and rules to meet the needs of the participants.”
“I like working in adapted sports because it is the purest form of sport,” said Frisina.
Megan hopes to one day start sports leagues for physically and mentally disabled children similar to the adapted sports camps she worked. She once told her parents that she has been so lucky to do what she does on the court, she has been so blessed.
Assistant Basketball Coach Alyson Campbell, in talking about Megan’s goal to work with children with disabilities stated, “Her passion for helping others is evident in all she does.”
According to Coach Campbell, “Megan’s goal is to work in adapted PE/Special Olympics settings…She has worked at Camp Cheerful and at a summer camp working with children with Autism while a student at BW.”
Bryan Boss, another BW student and summer intern, worked with Megan at the Adapted Sports summer camp. He was impressed with Megan’s devotion to the camp saying, “She is a very personable person.
She could talk to the parents and on the flip side, work with the children which is a very difficult thing to do working with disabled children.”
Frisina is a person of great character and a genuine leader on and off the court. She admits that “playing a sport at the collegiate level has given me a great work ethic. The lessons I learned in basketball, I’ve been able to carry over into the rest of my life.”
Coach Campbell adds that, “Megan has continued to be a person and team member of great maturity and character. She has become more confident in her leadership role, and will be a great leader in the ‘real world’ because she practices what she preaches.”
When asked to describe a time where she faced an adverse situation and how she handled it, Coach Campbell related this incident, which demonstrates her character. Coach Campbell said, “When we learned of our post-season ban, Megan was the first person to speak up and gave the team reasons why this season was still going to be special. Her words were exactly what we needed. The team and coaches knew Megan was genuine about her words, and she continued to follow them out through the entirety of the season.”
According to Campbell, “Megan has always accepted her role on the team, and is extremely unselfish. She always wants what is best for the team. She is a great role model to our younger kids, and has bought into our team concept and program ideals.”
“Megan has been our emotional leader this year as we have overcome a variety of adversities,” Campbell said. “Megan always knows the right things to say in certain situations. She has gained the respect of her teammates by working hard all the time, and being the consummate teammate.”
One of Megan’s cherished memories of basketball at BW was last year’s senior night where the Yellow Jackets were down 17 points with nine minutes left and the team pulled out a win.
“We came together as a team and pulled off an amazing comeback to cap off the regular season,” Frisina said. “These four years have been challenging, but standing there on senior night I realized it was all worth it.”