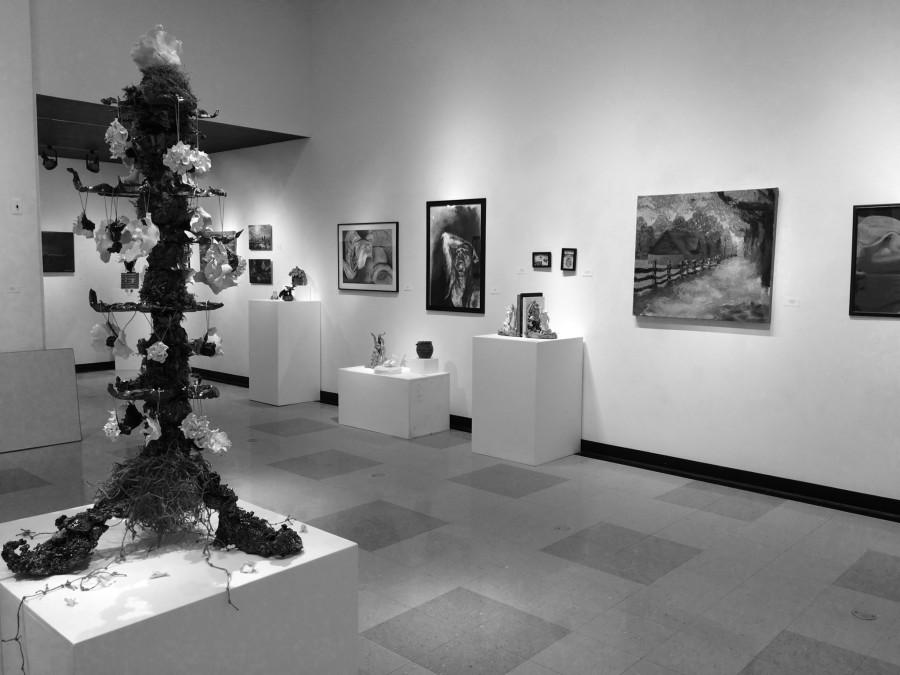 Baldwin Wallace University is currently hosting its annual Student Art Exhibit. This exhibit showcases the artwork of students from all fields of study.
All BW students are eligible to submit artwork for the show, with the possibility of being awarded a prize. All mediums of art qualify for entry and the BW exhibit ranges from oil paintings to pieces of handcrafted jewelry. Some of the artwork is available for purchase.
A stoneware clay piece displayed on a wall that was entitled, The Passive Fray, was intricate in design. The coloring was brown with a hint of blue and the end result resembled the texture of a feather.
Another print displayed was created by Daisy Krokos and was entitled Thumb Print. The background was off white and it was color enhanced with splashes of blue and green, which made it appear to be a thumbprint.
Michael Costic submitted his photo canvass called Tormenta. This photography featured Downtown Cleveland during a lightening storm.
“The piece that mostly stood out to me was called Box Space. It was the largest piece there and it was filled with so much color. There were 3-D boxes that were popping out at you. It was kind of like a rainbow, and it made me feel happy inside” Jules Noonan, junior explained.

The piece, Seattle Gum Wall, was very vibrant in color. It is an eye-catching piece of photography, captured by Sarah Rice.
Demi Wetzel entered two pieces of her artwork into the exhibit. She entered a clay figure painted with oil entitled Toad. She also entered an oil canvas painting inspired by her findings while blueberry picking.
There are a multitude of art pieces that are aesthetically pleasing to the viewers. BW students should take the opportunity to see this exhibit. The variety of mediums that were used offer appealing aspects to every piece.
“It was nice to see a lot of different mediums used in the exhibit. It was also amazing to see the talent that we have at BW, and how each of the students expresses oneself through artwork” Kristen Kalka, sophomore, explained.
“Seeing the creativity of others on campus really intrigues me. It was clear that the artists put a lot of hard work into their pieces. I could not decide which piece was my favorite because there were just so many sculptures and paintings that caught my attention” Christine Lyzen, sophomore said.
This exhibit is one of the six exhibitions held at BW each year. The other exhibits include the artwork of the senior art studio and art education majors, the ceramics invitations, and other exhibitions highlighting Ohio artists.
The art exhibit is located in the Fawick Gallery in the Kleist Center for Art and Drama building. The gallery is open Monday to Friday from 2pm until 5pm. You can also make an appointment by calling (440) 826-2152.