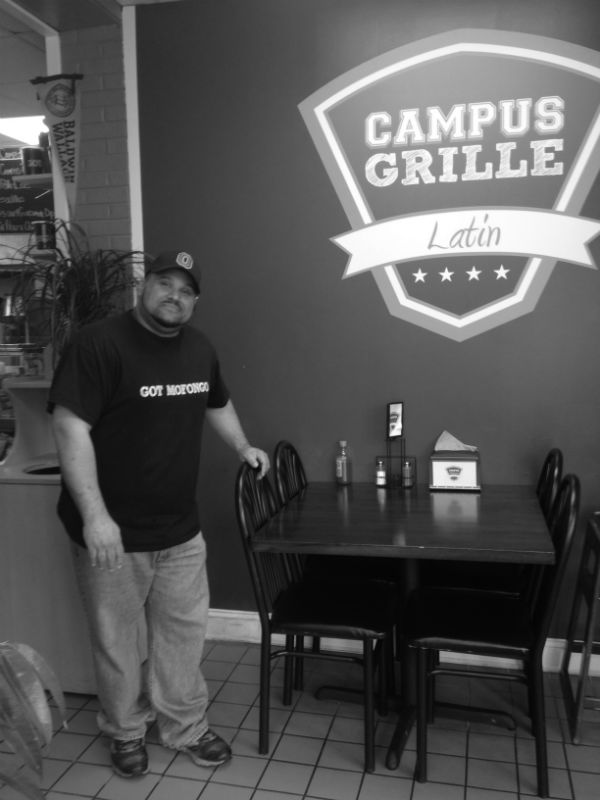 Chef Luis Roman, owner of The Campus Grille, opened his restaurant in such close proximity to BW’s campus because he feels that students are the perfect taste testers for the wide variety of cuisines the restaurant offers.

Seven months ago, Luis Roman opened up shop on the corner of Seminary and East Bridge. He has been pleasing Baldwin Wallace University students’ taste buds ever since.
The Campus Grille, located at 10 Seminary Street, is a hop, skip and a jump away from the BW campus. This is not by accident.
Roman chose a college setting for a reason. According to Roman, when it comes to new foods, students make great test subjects .
“They eat like crazy and they try new things,” said Roman, owner of the Campus Grille.
Originally from New York, he became inspired by visiting the hundreds of ‘Mom-and-Pop’ restaurants across the city. It was his desire to bring that kind of vision with him here to Berea. That is the kind of culture he hopes to create here, starting with The Campus Grille.
But what kind of restaurant is it?
“I don’t like labels,” said Roman. “We’re not a Puerto Rican restaurant, a Cuban restaurant…we’re Latin. We serve a little bit of everything,” Roman said.
With plans to open up multiple Latin restaurants around Cleveland, the Campus Grille is his test kitchen, and students are his all-too-willing guinea pigs.
Promotions such as “Wacky Wednesdays,” where BW students can use their Jacket Express cards to buy one entree and get a second for half the price, are particularly popoular among BW students. With deals like this, it is no surprise that the Campus Grille has been such a success, especially with BW students.
New to Campus Grille this semester, is the “Late Night Happy Hour,” where the Grille opens up from midnight to 3 a.m. to attract the late-night crowd.  According to Roman, so far the Happy Hour has been packed with hungry students.
Roman really does try to cater to the students. In fact, he said that the Happy Hour began when he visited Bar 107 one evening, and  students would come up to him and ask if his restaruant was open late. He decided to try it out, not just for the business, but for the students.
He hopes that with the late night happy hour, students will walk to the Campus Grille instead of getting in a car and driving to buy fast food on Bagley Road.
“Drinking and driving don’t mix,” said Roman. If it keeps one student safe, it’s worth it, especially if their reward is delicious and fresh food. “No food in our store is here longer than three days,” said Roman. “I’m at the market pretty much every day.”
With this hotspot for good, affordable food right next to campus, the union may have to watch its back.
The Campus Grille is open Monday through Saturday from noon to 9 p.m. and starting last month, the restaurant reopens “Saturday” for a Late Night limited menu from 1:30am-3am Sunday.