Show was chosen as response to students' reaction to political climate 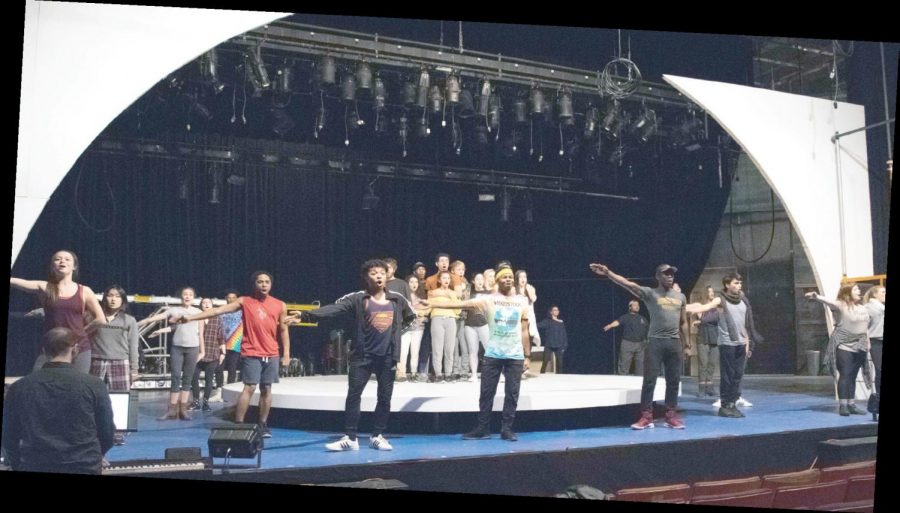 On Feb. 9, students will fervently take to the stage in Baldwin Wallace’s upcoming production of “Hair,” bringing new life and meaning to the musical that has been transforming audiences and sparking controversy since the 1960s.

“Hair” takes place in the midst of the draft where thousands of 18-year-olds are plucked from the comfort of their homes and sent off to fight, said Victoria Bussert, director of music theatre at BW and director of “Hair.”

Because of this devastation, a tribe of hippies band together in an act of protest and launch the anti-war movement, discouraging violence and promoting love and peace in a time of war.

Remell Bowens, junior BFA acting major and tribe member in the show, said that the general atmosphere of the production is, above all, one which inspires unity, love, and support.

“In the show, we’re kind of creating our rite of passage through the confusion and stuff that’s going on around us,” said Bowens. “[We’re] creating the environment that love reigns and we support one another.”

According to Bussert, this politically-fueled production was chosen in response to the feelings of fear and negativity
which were spawned throughout the student body following the recent election. It was then that she knew “Hair” needed to be produced on the BW campus.

“Two years ago, I would have seen ‘Hair’ as more of a history piece, and now it feels as relevant today as I think it did in 1967,” said Bussert.

“Hair” covers a wide range of hard-hitting topics that are strikingly pertinent in our nation today, such as race, violence, and politics. It’s the goal of the production to bring these thought-provoking topics to the attention of audience members, said Bowens, creating an awareness within the BW community.

“We’re bringing those up in this world and we’re sharing those things and making people listen to what’s actually going on. It’s an eye-opener for the audience.”

Not only is “Hair” meant to emphasize the issues of today’s nation, said Bussert, but also to give audience members a way to seek comfort in the theater and reflect upon their own thoughts and feelings in the face of disorder.

“It’s a safe way to kind of open up questions,” said Bussert. “I thought that was really important that our students
understand that it’s not just entertainment, but it also is a way to be politically active and it’s a way to engage in conversations.”

“Hair” will take place at the Beck Center on Feb. 9-11, 15-18, and 21-25. On Fridays and Saturdays, money will be raised for a variety of charitable causes which will be determined by the cast.