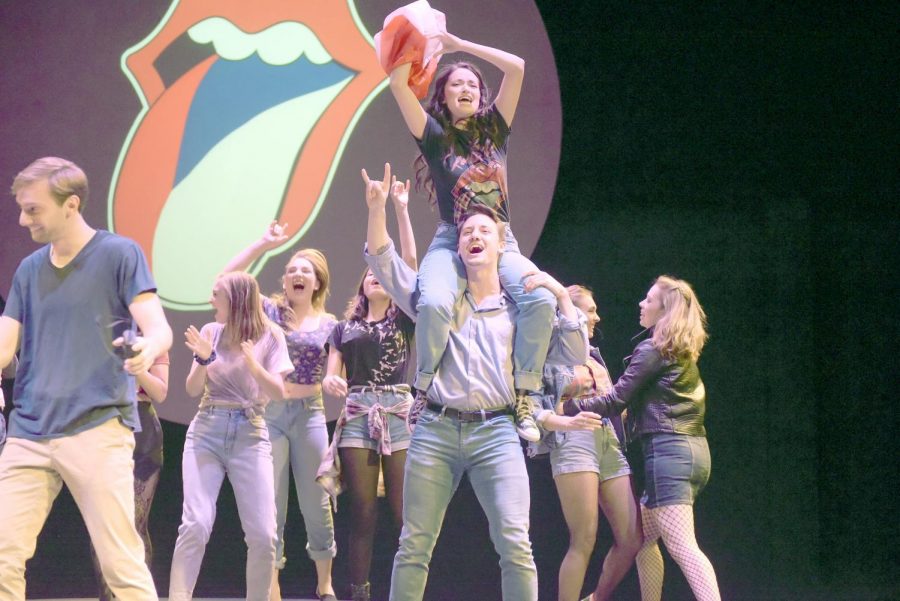 The play “Rock ‘n’ Roll,” which ran from Oct. 28-21, was recently recognized with a number of honors for the cast and crew.

The efforts of the cast and crew of Baldwin Wallace’s production of “Rock ‘n’ Roll” have not gone unnoticed.
Senior Brooke Turner and junior Sydnee Williams have been nominated to participate in the 2018 Kennedy Center American College Theatre Festival (KCACTF) Region 3 Irene Ryan Acting Scholarship auditions in Indianapolis from January 10-14.
Certificates of merit have been awarded to sophomore Michelle Levinson, freshman Aly Wein and freshman Katherine Swartzback for excellence in stage management.
The dramaturgy team consisting of Dr. Pamela Decker, sophomore Bailey Ford, sophomore Tyquira Fountain and junior Bryce Lewis received certificates of merit for excellence in dramaturgy.
Stage manager of “Rock ‘n’ Roll” Michelle Levinson says she oversaw many aspects of the show, including communicating with the sound boards, light boards, and the projection screen, which were all key components.
“One of favorite things to say is, ‘you don’t know what a stage manager does until they don’t do it,’” said Levinson. She says that what happens behind the scenes is just as important as what is happening on stage.
Levinson says that she was a bit nervous when the representative from the KCACTF came to see “Rock ‘n’ Roll,” but he was very impressed and awarded her with the certificate of merit for excellence in stage management.
Levinson believes the reason she received her award had to do with the people she worked with.
“I was lucky enough to work with amazing people who helped it all come together,” said Levinson. “Hopefully, it enhanced the show from an audience perspective enough that it made it truly excellent.”
She also noted that nearly all the people who worked backstage on “Rock ‘n’ Roll” were underclassmen.
Dr. Pamela Decker, head of the dramaturgy team says that research was key to understanding the background of “Rock ‘n’ Roll.”
“The show covers a very large time span from the late 1960’s through the early 1990’s,” said Decker. “It covers a lot of aspects of the Cold War, Czechoslovakian history, and rock and roll music.”
“Our role as dramaturgs in the show was to research the historical, social, and the cultural backgrounds, and to provide that context to the actors, the director and the audience,” said Decker.
The play covered a lot of dense material that needed to be researched and understood.
The context of “Rock ‘n’ Roll” was shown in a few different ways. “There were program notes that Bailey worked on, and I wrote a dramaturg’s note which summed up the history,” said Decker. “There were also displays in the Kleist lobby. Tyquira did a wonderful job making a timeline featuring major events of the period. Bryce recreated the John Lennon wall in Prague and that was also on display.”
Decker agrees that the success of “Rock ‘n’ Roll” was a group effort.
“We had a terrific cast of young actors who took on really challenging roles. Adam, the director did an amazing job putting it all together and guiding the actors,” said Decker. “I believe that our dramaturgy team did a great job of providing background context so everyone could come to the play with a larger understanding.”